The war between iOS and Android is never-ending, with fanboys on each side seemingly willing to battle to the death in the ongoing back and forth. While we’re accustomed to seeing these two platforms showdown on software and hardware features, though, today the two titans lock horns in a fight of a different kind – a sci-fi battle that pits iPhone users against their Android-wielding counterparts. But who wins? Find out after the fold!

From the jailbreaks of the iOS devices to the forced-closure of Android apps, many strengths and weaknesses of each ecosystem are highlighted in the short clip, and although the special effects and music are fairly amateurish, the video does remind us that the perceived war between Android and iOS users is rather silly and should never get more serious than a childish sci-fi battle. 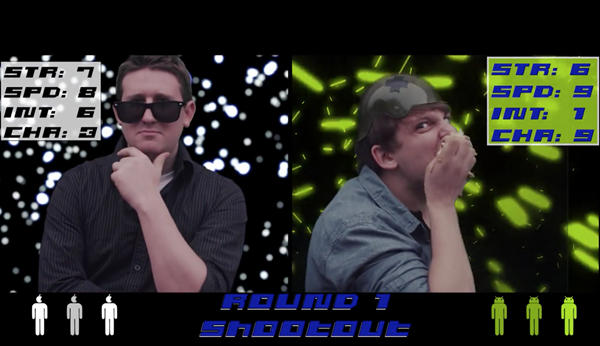 In fact, the video is rather fun, and given that it’s apparently "to be concluded", we’re definitely looking forward to the second installment. The final scene sees the iPhone defend itself with its secret jailbroken weapon, so it’ll be intriguing to see how Android counters next time around. Perhaps our Android-rocking friends will unleash a home screen widget capable of powers that iOS NC widgets can only still dream of?

Whether you prefer Android or indeed iOS, we should all be grateful that both exist. Each has borrowed significantly from the other over the past few years, and the competition has helped to strengthen and enhance the experience of using both. Thanks to iOS, Google was forced to introduce Project Butter, a movement with Jelly Bean 4.1 that brought a slicker overall experience, and similarly, Android’s open-source nature has coaxed Apple into relaxing the perimeter surrounding the "walled garden" and permitting third parties to create widgets, keyboards and integrate features like Touch ID into apps.

Both Android and iOS still have their strengths and weaknesses, and below, the sci-fi clip demonstrates some of them in an entertaining way. Don’t go expecting CGI or any other mind-blowing effects, mind, because this little video feels very much like it has been made on an Android or iOS device.

Give it a complete watch, and do share your thoughts in the comments section below.