Watch: iPhone 6 Plus Survives A Whole Night Buried Under The Snow [Video]

If for some odd reason you were wondering if your iPhone 6 or iPhone 6 Plus is snow proof, that question seems to be have been answered in what can be best described as another crazy experiment posted on YouTube. More on that, right after the jump!

TechRax is at it again with his iPhone 6 Plus as he tries to literally gives his phone a severely cold treatment. What did he do? He simply buried the phone with the network enabled and the battery at 68% under a pile of snow in the ground somewhere in what could be his backyard for all we know, but the point is that there’s an iPhone 6 Plus buried in the snow! 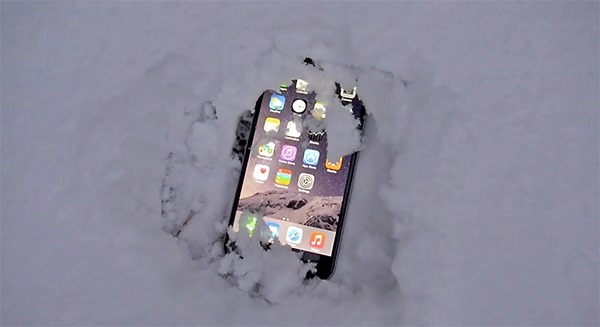 For a moment I thought TechRax might be experimenting with a time frame of a few hours or so, but nope, the guy left the phone out there over night for well over 18 hours, starting Christmas Eve. The morning of Christmas when the phone was dug up the ice was literally glued to the device, but the amazing bit was the functioning device itself and the display.

TechRax says that he tried looking for signs of life from his iPhone 6 Plus at night using Find My iPhone and the device was responding as it normally would. Apple has never rated the iPhone 6 / 6 Plus as devices that are water resistant or waterproof, and sure if you want to argue that the ice is a solid hence no issue was encountered, you can afford to not give this device some much deserved credit. Just keep in mind it survived in sub-zero conditions with chunks of snow glued to it over 18 hours later, and is something that can actually happen if you lose your phone, with data enabled.

This however does not mean it has any upper hand or is by any means better at water or extreme temperature resistance, it just means Apple made a product that is just a tad bit more than meets the eye. There have been instances where quite a few users have claimed that the iPhone 6 / 6 Plus perform very well when it comes to keeping the moisture out as well.