Google’s next big release of Android, currently simply known as Android L is only a short time away from release and it’s certain to undergo a name change before landing on the phones and tablets of users around the globe. In order to follow along with the current naming convention of choosing a name based on desserts that begin with the next letter in a sequence, Google only has so many options to choose from.

In a typically Google move the head of Android Sundar Pichai has tweeted a video along with the hashtag of #NationalDessertDay. The video shows a variety of desserts supposedly trying out for the role of Android L, with all kinds of loveliness on offer from lady lingers to lava cake. The video is nice and whimsical but we suspect we’re no loser to knowing what dessert Android will use even after watching the video far more times than we care to admit. If it were us, we’d keep the real choice back so as to keep it a surprise, but maybe we’re overthinking things somewhat. 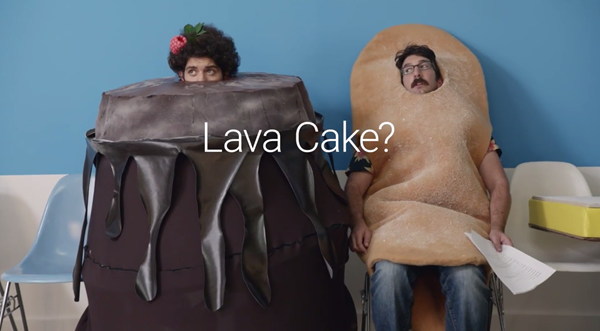 Google is expected to announce both a new Nexus tablet and Nexus smartphone within hours, both presumably running the new Android L. It’s a safe bet that we’ll find out the real name during the announcement of the two devices, though we’re much more interested in seeing what hardware Google has deemed worthy of the Nexus brand this time around.

Until then though, sit back and relax while watching Google’s Android L teaser video while trying to guess which ‘L’ we’ll be running on our Android devices for the coming months.

Our money’s on lollipop. But a past reference also hints towards Lemon Meringue Pie. Let’s see how it goes!