Apple’s iOS is certainly not short of success stories when it comes to turning little known developers into household names. We perhaps wouldn’t put ZeptoLab into the same bracket as the likes of ngmoco, but it certainly knows how to make a good iPhone and iPad game. With Cut the Rope, ZeptoLab showed that big games can come from arguably small premises.

So what do you do when you’ve had a game that’s been a huge success on the App Store, and had more than a little publicity in the process? Well, obviously enough, you launch a sequel and that’s exactly what the folks at ZeptoLab have been hard at work at putting together. Cut the Rope 2 has now been teased by the company with a twenty second trailer doing just enough to whet the appetite without actually showing us anything. How do they do that!? 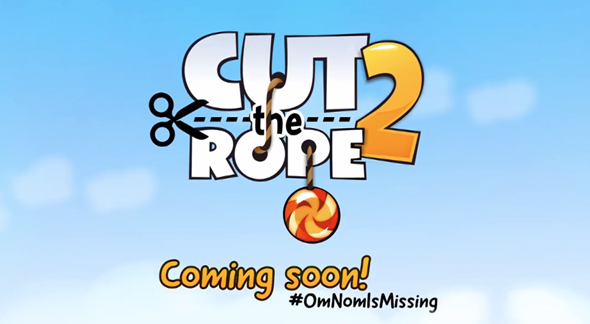 According to ZeptoLab, the game’s main character Om Nom has gone missing, presumed to have been swept away by a hot air balloon. Some people just can’t catch a break, can they?

Oh my candy! Om Nom is missing! Om Nom, everyone’s favorite candy-eating monster and hero of the Cut the Rope series of mobile games, has disappeared. Based on this footage, detectives say that it appears that Om Nom was swept away by either a very large bird, or, more likely, a hot air balloon. Can you help us bring him home? We need to find Om Nom in time for the launch of Cut the Rope 2. Please let us know if you see him! #omnomismissing

We were big fans of the original Cut the Rope game, so we can’t wait to see what ZeptoLab has in store for us with the second installment. There’s no word on when we will be able to get our hands on the game as yet, and the fact that we’ve not seen any in-game footage may either be a sign that a release is a ways off, or just that the developer is really, really good at playing the hype game.

Let’s hope it’s the latter, shall we?

Since there is no official release date given for the title, and considering how fast paced the mobile gaming scene is, we can only expect the title to launch within the next few weeks. When that happens, we will definitely inform our readers out it. Stay tuned to our coverage here at Redmond Pie!