Few Apple employees capture the imagination quite like Sir Jony Ive. British in a distinctly James Bond kinda way, Ive is the man that not only designs all of the hardware that comes out of Cupertino, but following the ousting of Scott Forstall he now also oversees all of Apple’s software design. The result is a ‘love it or hate it’ kinda thing – the hardware may be universally acclaimed but the same can’t be said of the software.

Product design is just one of the subjects that were covered when Ive was interviewed as part of Vanity Fair’s New Establishment summit. The interview has been public for a little while already, but Vanity Fair has now made the whole 25-minute interview available in video form for those that want to get the whole thing in its full glory. Ive covers the development of the iconic first iPhone as well as his friend Steve Jobs, who passed away back in October of 2011. 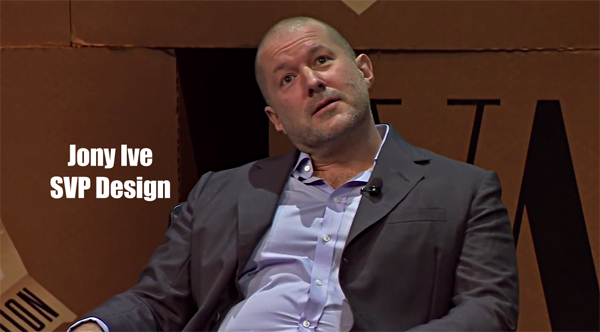 One of the more explosive comments to come out of the interview was when Ive found himself on the subject of Apple’s competitors copying its hardware designs. Presumably pointing the finger squarely at the likes of Samsung and relative upstart Xiaomi, Ive calls the process of taking his designs and imitating them as ‘theft,’ which is something that has caused plenty of comment from the companies riding on Apple’s design coattails. Ive has never been known for holding back, but accusing competitors of theft is never going to go down too well. We doubt he loses too much sleep over it though.

If you’ve even a passing interest in design or Apple as a whole then there are worse ways to spend half an hour. The video’s live on YouTube, which we’ve embedded below for your convenience, so make yourself a coffee and sit back with one of Ive’s iPads in your hands and check it out.