Watch A Sniper Round Pierce Through A PlayStation 4 In Glorious 50,000 Frames Per Second [VIDEO]

People have crazy hobbies, ideas, and even ways of becoming famous. A lot of clever YouTubers are a testament to this fact, and while some may choose to blend stuff to catch your attention, RatedRR prefers blowing stuff up, shooting it with high power guns and completely dismantling gadgets in the process. Their latest video shows what they did to a PlayStation 4 console that they managed to get their hands on, and boy, it ain’t pretty! 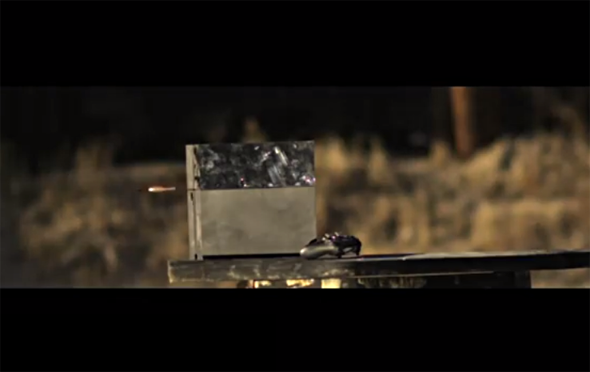 The video shows host Richard Ryan taking aim at a PlayStation 4 console (with a controller on top) with a .50 caliber Barrett Model 82A1 sniper rifle. Ryan usually likes to mince things with his wide array of arsenal, but this time, he opted for a little subtlety. The first shot, captured at 50,000 frames per second, shows the massive bullet go right through the console, leaving behind a hole in its wake. It looks amazing at those speeds if you’re asking us.

It’s a nice, clean puncture wound, but that’s it – here’s where things get messy. Ryan takes the second shot with the bullet entering PS4 from the side and exploding it from within. The console literally gets blown to smithereens, with little shards flying everywhere. In an odd way, it’s actually pretty. See for yourself below!

The PlayStation 4 console is the latest and greatest from Sony Entertainment, offering a futuristic gameplay experience and generally gathering favorable reviews everywhere. RatedRR has been after gadgets for quite a while, and recently have destroyed several Xbox consoles through various means. This is the first time that they’ve aimed for the PS4, but we’re sure there will be more to come – maybe with something more massive the next time? We didn’t really expect a PS4 to be treated this way, but it’s not my money, so they can do whatever they want their console!

The PlayStation 4 went on sale today in the US with a wider release to come in the following weeks.