Sometimes, something might seem like a good idea, but when it actually comes down to it, it doesn’t turn out to be as good of an idea as you first thought. And then there’s the idea of unboxing a Galaxy S7 underwater.

This is both an excellent idea, and surprisingly fun to watch. 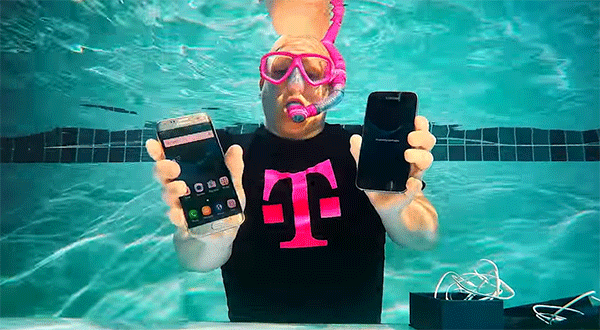 We discovered this after T-Mobile posted a YouTube video showing a brand new Samsung Galaxy S7 being unboxed in what appears to be a swimming pool. That might seem like an absolutely ridiculous thing to do until you remember that the Galaxy S7 and its bigger brother, the Galaxy S7 Edge are actually IP68 water resistant, meaning unboxing them underwater should’t pose any problems whatsoever. Well, except for the included earphones and wall charger, but why let a little thing like that get in the way of a good video?

And a good video it is, with a black Galaxy S7 getting its screen debut alongside a Galaxy S7 Edge that also puts in an appearance later in the video. While strictly an unboxing, don’t expect to see any in-depth discussion of either the hardware or the software because that’s a little hard to do when you’re breathing through a snorkel. Still, viewers are treated to the Galaxy S7 being used as a camera to take underwater photos, which actually look rather impressive. A side product of being a water resistant device, being able to take photos underwater is one feature that is often overlooked, although the number of times Galaxy S7 owners are likely to take advantage of that is likely to be a very, very small one.

The Galaxy S7 and Galaxy S7 Edge were announced by Samsung this past weekend and both are available for pre-order now ahead of a launch in the next few weeks.

Watch the full video by T-Mobile below.