With the Worldwide Developers Conference set to be held in San Francisco next month, the attending developers along with Apple device loving consumers will be keeping their eyes and ears firmly fixed on Moscone Center to see what innovations and updates the company will showcase.

Although most of the attention generally gets paid to Apple’s iPhone, it is perhaps the iPad that has recently been playing center stage, something which Apple describes as a "Post-PC Device". One of the main reasons why the iPad has been so insanely successful for the company is the fact that it packs power with ultimate convenience, allowing users to accomplish a wide range of tasks while on the move. 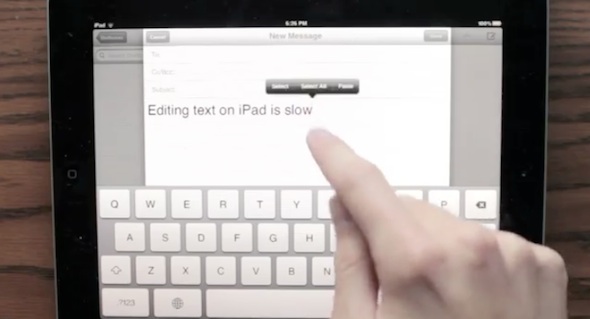 Looking past the successes of the iPad, YouTube user danielchasehooper has produced a video that focuses on what he believes is a poor implementation of the built-in gesture support when the keyboard is active on the iPad’s display. Anyone who has extensively used the keyboard for text input as well as editing a lot of information will probably agree with that notion and would like to see Apple make some changes going forward.

By making some simple changes to iOS, Daniel believes that the user experience could be significantly improved, with his proposed amendements being centered around selecting and editing on-screen text. The video proposes that the old method of moving the cursor into different locations on the screen should be replaced by either a single or double finger drag depending on how fast users want the cursor to move. Selecting text would also become a lot easier by allowing users to hold down the shift key on the virtual keyboard and then drag using the aforementioned method of selecting text.

Obviously the video is one man’s vision of how the keyboard gestures should work and therefore comes with no guarantee that Apple would implement these new gestures. However, Daniel is urging those who agree with that vision to back the cause and contact Apple to make a feature request for the proposed gestures. Check the video out and let us know what you think via our social discussion channels, would gesture improvements enhance your iPad experience?