iPad Coming to Verizon Wireless on October 28th. Is iPhone 4 Next?

While this is no where near as gigantic as a Verizon iPhone 5 deal would’ve been, it still is rather news-worthy: Apple’s smartphone-and-notebook-bridging gadget – the iPad – will be offered by Verizon Wireless and AT&T in the US starting 28th October. 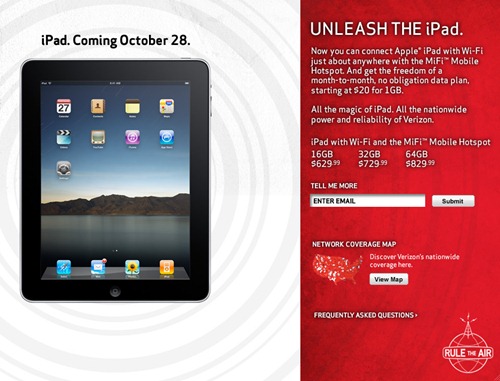 In a press release, Verizon said:

Verizon will be selling the iPad in three bundles which will differ by storage capacity: a 16GB for $629, the 32GB for $729 and the 64GB version for $829. All three bundles include a Wi-Fi only iPad + Verizon’s 3G-based Mobile Hotspot MiFi which can connect up to 5 Wi-Fi gadgets simultaneously. VZW will also offer the iPads stand-alone i.e. without the MiFi.

This is not contract-based. You’ll be paying $20 per month for a 1GB allowance (pretty low considering you get 2GB with AT&T’s 25$ 3G deal).

The iPad will be available from Verizon and AT&T stores across the nation on 28th October. Are you getting one?