Google’s Android mobile operating system could be about to score a massive new group of users, if Wired are to be believed. The claim is that a new wartime smartphone is being tested by the US Army, dubbed Joint Battle Command Platform. 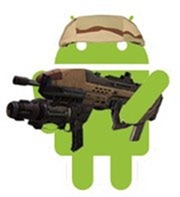 According to the Army, the platform’s development kit, known as the Mobile/Handheld Computing Environment, will be released to developers in July. The Army is exploring a rank of tasks for the device, including mapping, a "Force Tracker" that keeps track of friendly units and "critical messaging" for exchanging medical requests and on the ground reporting.

As TUAW reports, security is understandably of high priority here, especially with sensitive communication likely to be a cornerstone of the device. Portability is also of importance with the new devices said to weigh around 2 pounds – less than the current alternatives.

The US Army had been rumored to be working with Apple to produce a device destined for use on the front-line, though it now appears Android’s ability to be heavily customized could win through despite the Army’s past use of Apple products.