Yesterday, we covered a rather dubious looking spec print supposedly detailing the next 13-inch MacBook Pro, but today, courtesy of the guys over at 9to5Mac, we have something a little more legitimate looking. With WWDC next week, the talk of a MacBook refresh is really hotting up, and this latest leak details the prices – in US and Australian dollars – of the Mac range, as well as other associated peripherals.

In the accompanying report, 9to5Mac states the image represents the full pricings for the upcoming Macs, adding that the list includes the Retina 15" MacBook Pros which have been rumored on and off for some time now. The "Standalone kit" is likely to represent iPod shuffles, which, in the grand scheme of things, don’t quite get us as excited as the Macs.

In the midst of the many conflicting reports, it does now appear as though we will be seeing at least one Retina MacBook Pro come next week, and if you’ve had any interaction with the new iPad, you won’t need me to paint a picture with words regarding how exciting a prospect that is.

With Microsoft and Sony having talked software for much of this week, it will be good to finally see some upgraded hardware, and although we’re still – even at this late stage – taking nothing for granted, WWDC ‘12 looks to be the real deal. 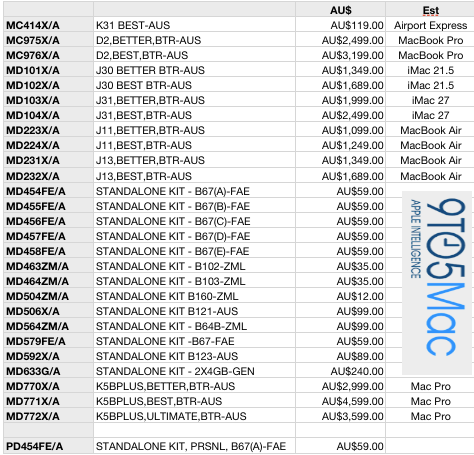 Early reports which suggested the MacBook Air may get a Retina display look dead in the water, and given the extra bulk that would be needed to support the battery-draining, uber-sharp screen, this may be in implementation specific only to the Pro – at least for the foreseeable future.

As well as the Mac range, Apple is also expected to go into more detail regarding iOS 6, and as we already know, its in-house mapping app will likely be the centerpiece. Most of the other details remain under wraps, so as well as the confirmation of the specific improvements to the Mac and MacBook range, the sixth edition to the Cupertino company’s mobile OS will also be a major talking point.

The event commences from June 11th at 10AM, and being fairly big fans of new advancements in technology, expect round-the-clock coverage of everything WWDC here at Redmond Pie!