If you’re an avid follower of mobile tech coverage, you’ll have found that Apple’s elusive iPhone 6 continues to command a fairly decent proportion of the blogosphere’s column inches, which isn’t bad going given that we’re still over four months from the purported release. Based on a bunch of info an accompanying leaks, we’ve painted what we believe to be a fairly vivid picture of what Apple is preparing to release in Q3, and a new comparison of an iPhone 6 mock-up against pre-existing iOS devices offers an even better perspective.

The guys at MacRumors have managed to get their hands on one of the iPhone 6 cases doing the rounds, and used it to 3D print a model of the device itself based also upon leaked schematic dimensions. By placing the printed device inside the case, MacRumors was able to mimic the appearance of the iPhone 6 enveloped inside protective housing, and usefully, also took the opportunity to run a side-by-side comparison with several older and current iOS devices. As you can see from the image, you have your iPhone 3G, iPhone 4 and iPhone 5, with the mock-up placed alongside the 2012 release also being flanked by the iPad mini with Retina display. As you will notice, it’s considerably larger than what we’ve seen so far, but with the iPad for company, cuts a very slight figure.

One thing that will be very interesting to see is whether, with the alleged larger, 5.5-inch variant of the iPhone 6, Apple decides to reshuffle the set-up of the home screen icons. When the iPhone 5 first joined the party, its longer display allowed for an additional row of icons, and while the jump to 4.7 inches mightn’t be enough to facilitate this extra use of the real estate, a 5.5-inch model should, you feel, be able to display more apps and folders. 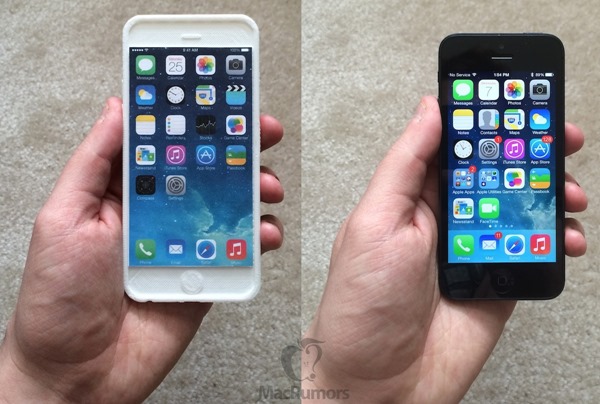 As we’ve picked up through the numerous reports, the iPhone 6 will be quite the departure from the current iPhone 5s, with a curved rear shell akin to the iPad Air, and a power button repositioned to the side for a more comfortable reach given the larger form factor.

Do you believe the time has come for Apple to offer these display increases? Or is the iPhone line-up just fine as it is? Do share your thoughts below!