We currently find ourselves at that time of the year which brings both delight and pain to members of the Apple product loving world. On one hand, the Cupertino company has just released the brand new and improved iPad which will be hitting the shelves in less than a week. They have also released a point upgrade to iOS 5, taking us to version 5.1 as well as a revamped Apple TV unit. On the other hand, those amongst us who love to jailbreak their devices, and perform a software based carrier unlocks on their iPhone find themselves in turmoil.

The release of iOS 5.1 brings about the beginning of the cat and mouse game all over again, with Apple more than likely closing any previously used vulnerabilities in earlier versions of the OS, leaving jailbreak development teams looking for an alternative way to bypass their restrictions. It also puts those who rely on a software unlock in a quandary, as upgrading to a stock version of the newest iOS would also update their baseband, removing the effectiveness of the Ultrasn0w unlock tool. As always, the iPhone Dev-Team have already warned users on their official blog about the dangers of blindly updating to iOS 5.1, advising that if they require an Ultrasn0w unlock, to make sure that they update via a custom built IPSW.

The Dev Team have also announced that Ultrasn0w itself will be benefitting from an update in the next few days, which will bring support for the iOS 5.1 firmware. The promised update will be music to unlockers ears, but will not bring any additional baseband support and will only offer the ability to unlock devices and basebands which are currently offered by the 1.2.5 version of the tool. The currently supported baseband models are:

If you are a jailbreak fan who requires an Ultrasn0w unlock, but can’t dig deep enough inside to find the patience required to wait a few days until the Dev Team gets the latest release fine tuned, then a developer known as zmaster has you covered. He has released a tool on his own repository that goes by the name of ‘Ultrasn0w Fixer‘, with no prizes for guessing what it does. The package is designed to be an interim fix for Ultrasn0w, meaning that devices running iOS 5.1 can install the Fixer package in the first instance, then install the current version of Ultrasn0w which will provide the necessary unlock as long as the device and baseband are supported. This particular Ultrasn0w fixer package is modified from an earlier version from a different developer and can be installed by following a couple of simple steps.

Step 1: Launch Cydia and select the ‘Manage‘ tab from the tool bar at the bottom of the application. Select ‘Sources’ from the resultant list.

Step 2: Tap the ‘Edit‘ option in the top right hand corner of the screen before selecting the ‘Add‘ button on the left hand side of the tool bar.

Step 3: In the pop up alert view enter the repository URL which is ‘http://repo.iparelhos.com‘, then press ‘Add Source‘.

Step 4: After the repository has refreshed and finished loading sources, tap on the repo name in the sources list which will display the Ultrasn0w Fixer utility.

Step 5: Select the Fixer utility, pressing ‘Install‘ in the top right hand corner. Confirm the installation and then wait for the process to be completed.

Step 6: Now that the Fixer package is complete, the current Ultrasn0w 1.2.5 software needs to be installed. Select the ‘Search’ option from the bottom of Cydia, typing in ‘Ultrasn0w‘ and hitting the ‘Search‘ button.

Step 7: When the Ultrasn0w tool appears, select it from the table and then select ‘Install’ as per step 5. After the installation has been confirmed and processed, the device should be unlocked as long as it meets the hardware and baseband requirements. 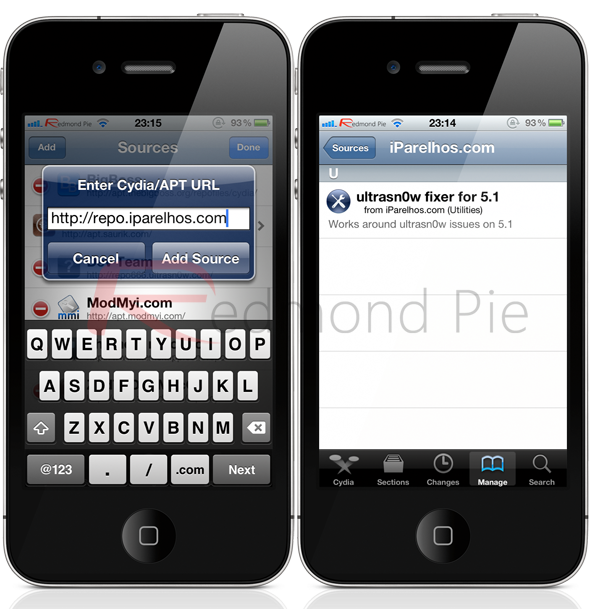 As a side note, it is worth mentioning that the developer has stated that the Ultrasn0w Fixer tool must be installed prior to the Dev Team’s Ultrasn0w being installed upon the device.