In a move almost contemporaneous with Instagram’s significant update for iOS, Twitter has announced its intention to integrate photo filtering into its iOS and Android apps. Instagram’s effortless application of a varied range of filters have made it a huge hit with point-and-shoot photographers, and it’s a hit Twitter simply cannot miss.

The updated apps are set to drop over at the Apple App and Google Play Stores later today, and will both pack eight filters including Warm, Cool, Vintage, Vignette, Black & White, Cinematic, Happy and Gritty. As with Instagram, you can check out how any given filter will look on your image before applying, and you can submit your filtered shot either in its original aspect, or in the famed square format.

The Twitter app has, like the Facebook app prior to version 5.0, been subject to a great deal of scrutiny. Twitter alternatives are rich and plentiful, and a large portion of users are now using the likes of Tweetbot. But with these new filter effects on board courtesy of a collaborative effort with Aviary – or specifically, its photo editing SDK – Twitter users have a reason to give the official client a second chance. 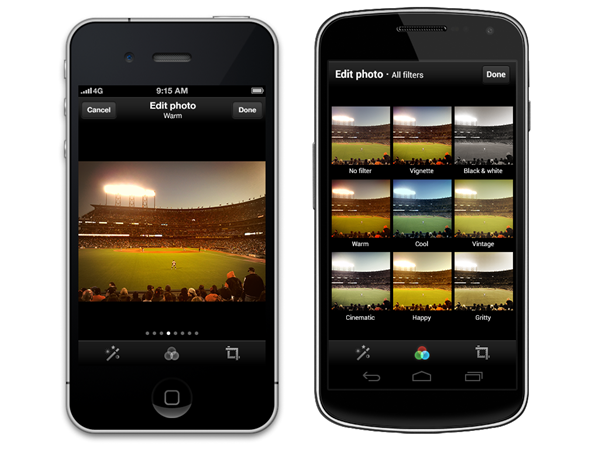 Aviary – for the uninitiated – specializes in implementations of this kind, and has its fingers in many a pie, so to speak. The SDK is used on Flickr, Yahoo and Squarespace among many others, and as well as helping Twitter join in the filtering fun, offers auto-enhancement, scaling and cropping.

As regular Twitter users will have noticed, the service has been given quite a few alterations of late, and the profile pages now take on a much more image-friendly approach. Up until now, Twitter has integrated rather smoothly with Instagram, but with the Facebook-owned app ditching Twitter Cards support recently, it’s not surprising to see this big update arriving so swiftly hereafter.

The newly-updated app hasn’t yet gone live, but we’ll update this post accordingly when it becomes available for download.

UPDATE: Twitter for iOS and Android with photo filters are is live in both App Store and Google Play.