Twitter is one of the most popular social networking sites on the planet, and although it doesn’t yield the same amount of active users as Facebook, it offers a fantastic niche platform from which people can communicate in the here-and-now.

With smartphones now an essential peripheral to most, tweeting on-the-fly via mobile is more popular than it ever has been, and with plenty of developers interested in creating Twitter-based mobile apps, there are literally hundreds to choose from. The competition has helped some of the very best apps thrive, and although Twitter’s official mobile app isn’t as lackluster as any of Facebook’s, there are at least half a dozen clients superior.

Tweetbot falls under that category, and is even regarded by many iOS users as the best in its field. Combining everything one could need in order to enjoy the weird and wonderful utterances in the world of The Twitters, it functions like a charm while offering a nice, alternative, darker user interface.

With the so-called "iOSification" of OS X in full swing with the somewhat hybrid Mountain Lion, we’re seeing more and more developers attempt to emulate mobile success on the desktop platform. Tapbots, the team behind Tweetbot, has revealed in the past that its immensely-popular iOS app would be arriving for Mac users at some point in time, and in news that should excite Mac-using Twitter enthusiasts the world over, that day has now arrived. Well, sort of.

An Alpha version of Tweetbot for Mac has just been made public, and is linked to for download at the conclusion of this post. Usually, an Alpha release carries many heavy bugs due to being in the early stage of development, and although it’s not without its imperfections, it’s one of the best Alpha iterations we’ve ever seen. 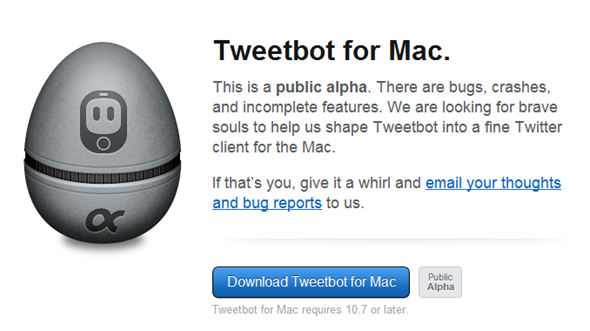 With Tweetbot having built a reputation for providing a flawless interface matched only by usability, expect nothing less with the Mac version. Despite its Alpha moniker, it’s on par – if not better – than most other Twitter clients; even the official version. Again.

As well as looking the part, it packs in all the settings you’ve become accustomed to, including streaming, pinning, and the ability to choose your desired image uploading service. There’s no support for notifications or iCloud syncing just yet (it would need to run through the Mac App Store to do so, after all), but once Tapbots submits it for publishing further down the line, expect these features to be included as standard. 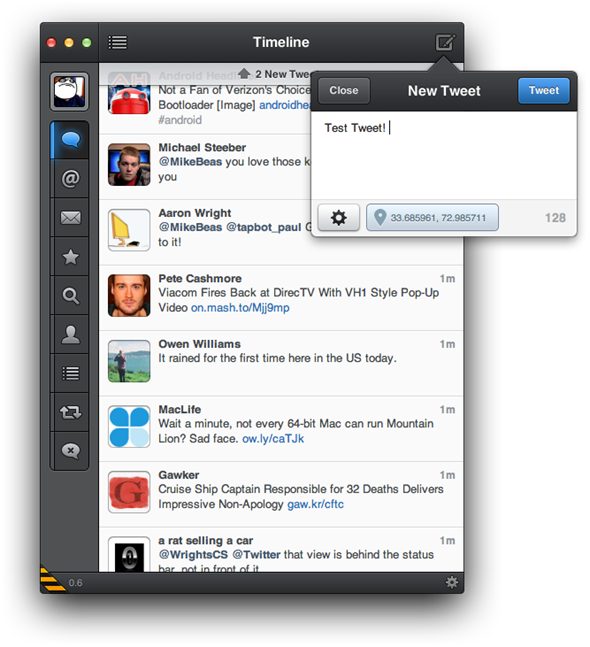 If you own a Mac and frequently use Twitter, you’ve really no excuse to not try out the desktop version of Tweetbot. Yes, it’s by no means the finished article, but by downloading, testing, and offering your critiques and bug reports, you’ll be edging Tapbots – and the rest of us – closer to that wondrous version 1.0.