Apple’s latest software advancements to power the Apple TV – which have been available for a while now via the in-test tvOS 10.2 – have been in the hands of users for quite a while now.

Developers and testers have been interacting with the platform for a number of weeks now with no real sign of any outward-facing changes, but if a new and highly sporadic splash screen is to believed then it looks as though at least a few feature improvements could be on the way. 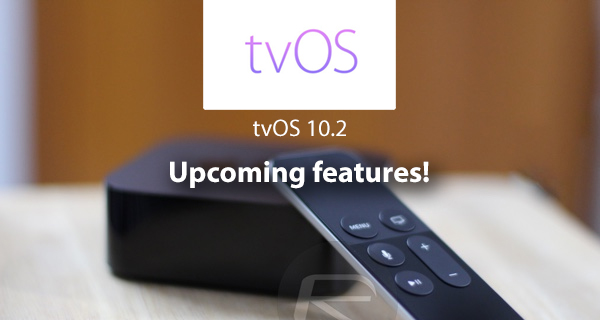 For some entirely unknown reason, and without any warning whatsoever, a number of Apple TV owners who are currently in the process of testing tvOS 10.2 betas have started receiving a “What’s New” splash screen on the Apple TV that does a very good job of instantly listing out a bunch of new features.

Given the fact that those same users have yet to find any real new changes in tvOS other than bug fixes and generic improvements, we can only deduce that the splash screen is a sign of what’s yet to come, rather than what has actually already been exposed to the user.

As discovered by 9to5Mac, the splash screen instantly starts by informing users that they will be able to “discover more with TV app”, which is obviously a reference to the new TV app which is already available on tvOS and iOS and allows users to instantly continue watching shows as well as discovering new shows that may be of interest. This appears to be Apple’s way of getting more users onto the services provided by the app.

There’s also the notification that “rentals across devices” will be available, enabling users to purchase or rent content on an iPhone or iPad and watch it instantly on the Apple TV running tvOS 10.2. 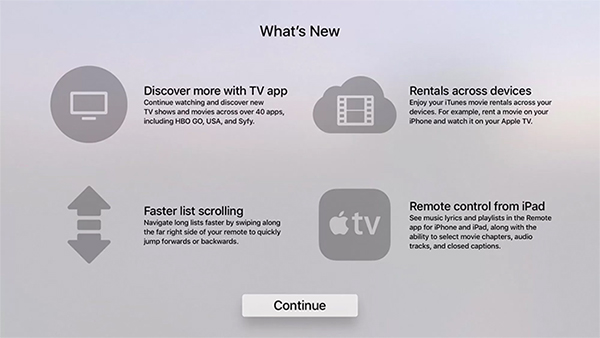 However, things get really interesting with the two additional feature improvements. First of all, Apple is using the new splash screen to tease the incoming ability to scroll through long lists of content by swiping down the far right side of the accompanying Siri Remote. It would also seem like we are about to receive a dedicated remote control app for iPad which so far has only been available on the iPhone: “Remote control from iPad”. Apple is suggesting that users will be able to “see music lyrics and playlists in the Remote app for iPhone and iPad.” We currently have no idea when this is going to happen, or be unlocked in the software, but it looks like it’s definitely coming.