Taking part in an impromptu FaceTime call is becoming an increasingly popular event during musical events. First we had Beyoncé taking an iPhone out of a fan’s hand and talking to her friend through FaceTime during one of her performances. Now we have the news that Nine Inch Nails’ frontman Trent Reznor invoked a FaceTime call with one of his friends during a show in Las Vegas. Although FaceTime itself is an extremely emotive way to communicate, the feeling was further heightened by the fact that the friend in question is currently suffering from terminal colon cancer.

Andrew Youssef works as a photojournalist and has dedicated much of his professional career to documenting the music industry through the use of his camera. The suffering of a close friend was obviously on Reznor’s mind during the Las Vegas gig, but rather than blocking that emotion out, the Nine Inch Nails rocker decided to embrace the feeling and share the emotion with his fans through the use of Apple’s FaceTime protocol. After spending years capturing imagery and living in the shadow of big names like Black Sabbath, Youssef found himself the center of attention while fans chanted his name down the phone to him. 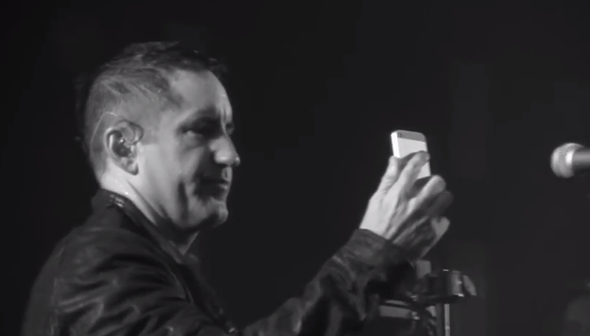 Andrew’s battle with the terminal illness began back in 2011 when he was diagnosed with colon cancer. Rather than hiding away from the business he so clearly loves, he decided to continue documenting the live music scene and had his work featured in his own "Last Shot" column for the OC Weekly publication. The story itself invokes a large amount of emotion, something that is increased when you learn that Reznor and the photographer became friends through Twitter after Youssef described his love of the band’s lyrics and how he felt his own connection with the songs.

The majority of Apple’s advertisements that include the FaceTime calling functionality have always attempted to portray the feature an extremely emotive way to communicate with family, friends and loved ones. Being able to not only hear the person’s voice but also see and recognize their facial reactions from anywhere in the world accelerates communication to a whole new level. We already know that FaceTime is regularly used by parents working away from home or military personnel doing a tour of duty. Now we know that it has an equally valid use for rockstars paying an emotional tribute to close friends.