It’s hard not to feel an overwhelming sense of fondness and respect for Tim Cook. Ahead of a scheduled appearance on the Late Show with Stephen Colbert, the Apple CEO surprised a bunch of unwitting customers by making an impromptu appearance at his company’s flagship Fifth Avenue Apple Store in New York City. Not exactly standard behavior from a CEO who sits at the top of one of the richest companies in the world, but then again, Cook isn’t a standard CEO. It’s also a move that will undoubtedly add positivity to Apple’s iPhone 6s sales campaign and win Cook even more fans than he’s already got.

We’re not entirely sure if the visit was scheduled with management at the stunning Apple Retail Store, but it certainly seemed to have caused a certain level of chaos, with fans and consumers alike attempting to get close to the Apple CEO. During his time in the store, Cook was unbelievably relaxed and happy to mingle with customers, take selfies with individuals, and generally interact with those enthusiastic individuals who have contributed in such a huge way to the success of the Cupertino-based company. 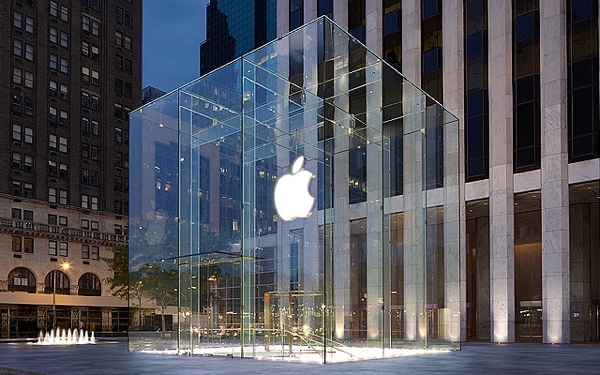 It appears that the enigmatic Tim Cook is going to be an extremely busy man over the next few months. In addition to his day-to-day duties of running the world’s richest company, he also have an increasingly packed PR schedule. Cook has scheduled appearances on Stephen Colbert’s the Late Show, as well as a booked appearance at the BoxWorks Conference. 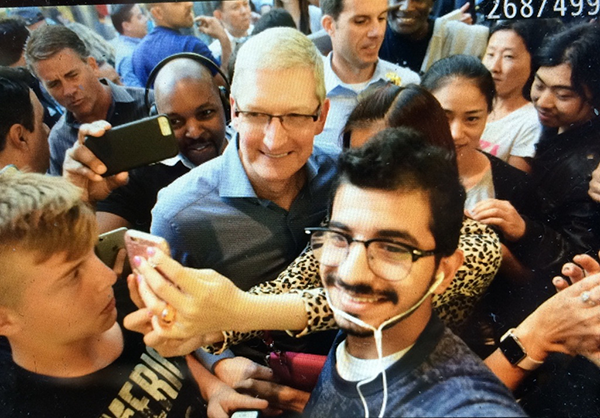 There’s also his appearance at The Wall Street Journal’s WSJ.D Live Conference next month that he has to look forward to. When you add that to his appearance on Good Morning America last month, and take into account that he headlined his own media event last week, it’s not hard to see why Cook is classed as one of the most dedicated and hard-working CEO’s in the business. 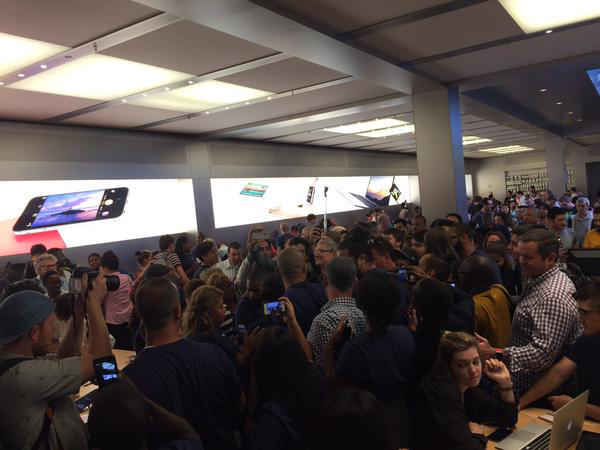 Can you imagine casually popping into your local Apple Store Genius Bar appointment, or to get some advice on the latest MacBook pro lineups, only to find that the man who introduces all of your favorite toys is standing in front of you? It’s not the first time that Tim Cook has shown up at Apple Stores in cities that he’s visiting, but it’s probably the first time that he’s done it and managed to perfectly photobomb Eddy Cue as well. Keep up the good work, sir. 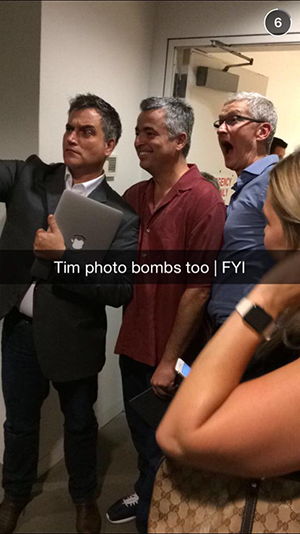