Apple CEO Tim Cook recently met with Donald J. Trump as part of a pre-arranged evening dinner gathering. In amongst the agenda-items, was a discussion about the Trump administration’s infamous tariffs, with the US President admitting that Cook provided compelling evidence as to how the tariffs would impact Apple’s ability to be competitive with foreign businesses.

Every business affected by the proposed tariffs – some of which are ongoing and some of which are being prepped to take effect later this year – will have its own unique issues in the market that it is involved in.

During the dinner, Apple CEO Tim Cook took the opportunity to discuss Apple’s issues with the proposed tariffs and outline how it will be difficult to remain competitive when companies like rivals Samsung are now subject to those same conditions as the manufacturing element of that business in located predominantly in South Korea. Apple would be required to pay additional taxes on China-made products, whereas Samsung wouldn’t.

Cook argued that it would make it difficult for Apple to effectively compete against the non-US business, which, in turn could end up hurting the US-based business and have the exact opposite effect to what the tariffs were supposed to do.

The originally proposed plans would have introduced a 10% tariff on a large array of consumer goods that most of us purchase. This would have included smartphones and, of course, Apple’s iPhone, which falls into that category. The tariffs would have likely meant that Apple would have been forced to hike the price of the product. Those tariffs have been delayed until December 15, 2019, which means that Apple can get its next-generation iPhone out into the market before that date. 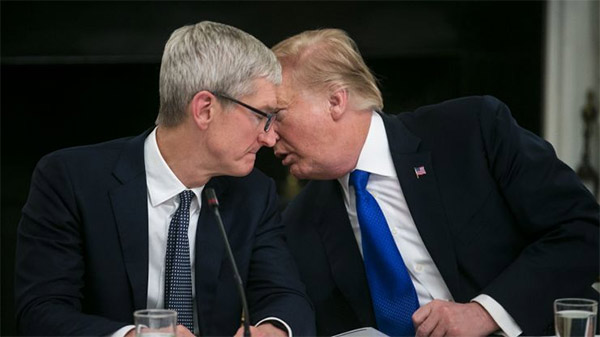 After the dinner, President Trump told reports that Tim Cook “made a very compelling argument” against the tariffs, which at least indicates that Trump was prepared to listen to what the leader of one of the world’s largest company was saying.

Much to the delight of investors, Apple’s stock rose 5% on the news of the delay of the tariffs on iPhone but those same investors will be impatiently waiting to see how long Tim Cook’s company can continue dodging the universally slated tariffs.