It’s hard to imagine a technology partnership bigger than that of Apple and Facebook. The world’s largest and most exciting technology company has recently embraced the world’s largest social network by offering native sharing support in the up and coming OS X Mountain Lion as well as iOS 6, with the latter being set to be released later this year. 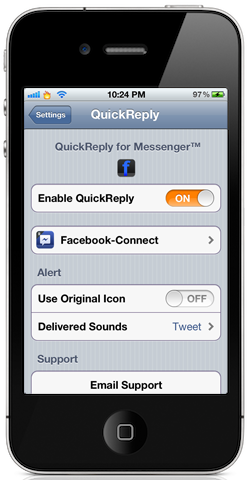 As we all know, Facebook has been offering iOS apps for their services for quite some time now, with the most popular one being the official Facebook app as well as the dedicated Messenger app which offers simple messaging and chat features. One of the most needed feature in iOS is the ability to quickly reply to text messages, a feature that seems to be getting slapped into every messaging-type app at the minute, if you’re jailbroken that is.

The QuickReply For Messenger package is following the footsteps of a similar package that brings quick reply to the popular WhatsApp messenger app, something that was built by the developers of BiteSMS and follows the same pattern of allowing users to quickly send a reply from anywhere on the device when a message comes through. QuickReply For Messenger brings that exact same functionality to the Facebook Messenger app, albeit with a different user-interface. 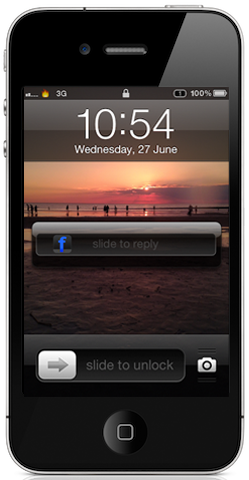 Some iOS users prefer to use the Facebook Messenger app over the full-featured Facebook app as they only require the messaging functions without any other Facebook complexities, such as Timeline and status updates. When installed, this tweak allows users to quickly send a reply without actually having to open the app and leave whatever it is they might be doing. QuickReply For Messenger definitely brings notable time saving features to users and is available with a free three day trial for those who want to give it a shot before going ahead with the purchase.

QuickReply For Messenger is now available to download from the BigBoss repository, requiring iOS 5 or above. The developer is offering a free of charge three day trial with a $1.99 purchase being required if you want to unlock the package completely. Previous purchasers of the TwitkaFly tweak can download the package from $0.99. 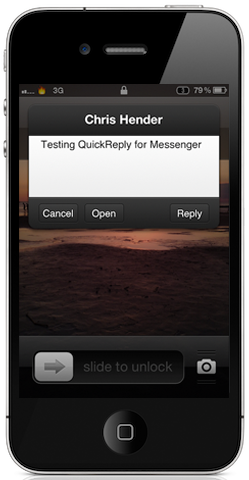