Quite some time has passed since we visited the Changes section of Cydia and found a well made Siri-based tweak that actually provides some useful functionality. The stock implementation of Siri by Apple is impressive, with the intelligent assistant being able to interact with a number of important and useful parts of iOS, meaning that any third-party enhancement for jailbroken devices need to try really hard to bring some real-world improvements. 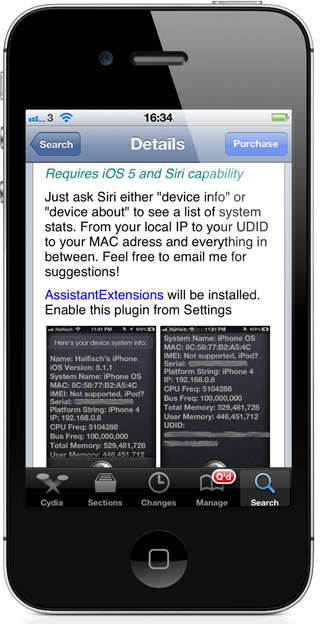 From a personal perspective, the DeviceInfo tweak is certainly a tweak which I appreciate and something that users would benefit from thanks to the information it feeds back to the user after the command is given to Siri. As is usually the case with Siri-based tweaks, DeviceInfo relies heavily on the AssistantExtensions framework to allow it to not only be invoked through an audible command, but also to allow it to utilize Siri to actually display the resulting information.

The information that is returned from DeviceInfo is extensive and should certainly cure the curious minds of those who like to know the technical details about their device as well as the internal information. When the chatbot feature of AssistantExtensions has been invoked, users can simply say "device info" or "about device" to let Siri know we want some technical information. The result is returned within the Siri interface and includes the device’s name and current version of iOS it is running on top of. The unique MAC address and IMEI number is also returned (if relevant) as well the individual device serial number and device type, whether it is an iPhone or iPod. 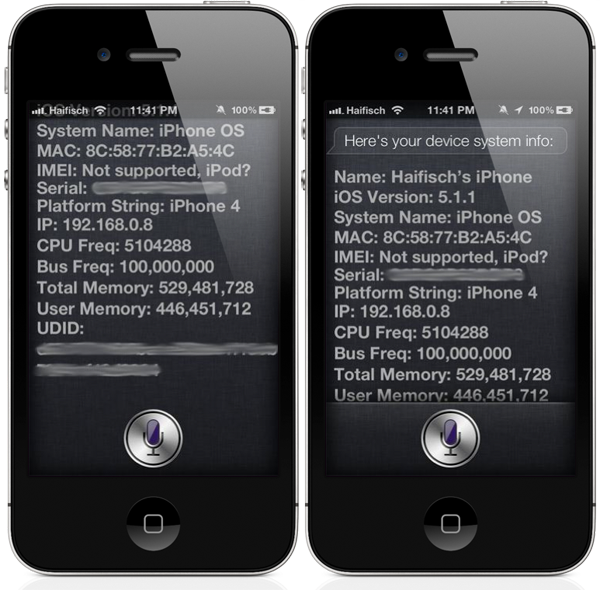 The IP address, processor frequency, UDID and total installed memory is also returned to the user, making DeviceInfo a very good and extensive tweak. The AssistantExtensions tweak will be installed as part of the installation process if it isn’t already on the device, with this Siri-based package not appending the home screen with any additional icons and it doesn’t come with any configurable options through the Settings app.

DeviceInfo is available to download for $1.00 from the BigBoss repository and requires a Siri capable device running iOS 5 or above.