Apple and Samsung have enjoyed a long run at the top of the smartphone game. In fact, it could be argued that the two companies, who produce iOS and Android devices respectively, have the smartphone industry pretty much dominated. Sure, there are companies out there manufacturing seriously impressive hardware, but no-one comes close to breaking the dominance of these two. In an effort to try and appeal to the masses with something unique and entirely different, Alcatel is about to introduce a new smartphone that comes packed in a box which can double as a Virtual Reality headset. Seriously.

As a company, Alcatel is generally synonymous with producing Android-based smartphones that sit at the budget end of the spectrum. And there’s nothing wrong with that; a company that knows its place in a saturated market, and applies resources into catering to that demographic, is generally one that will stay in business and be successful. According to a leaked image, it seems that Alcatel is about to change its direction with the Alcatel OneTouch Idol 4S smartphone, which comes packed in a certified Google Cardboard viewer. 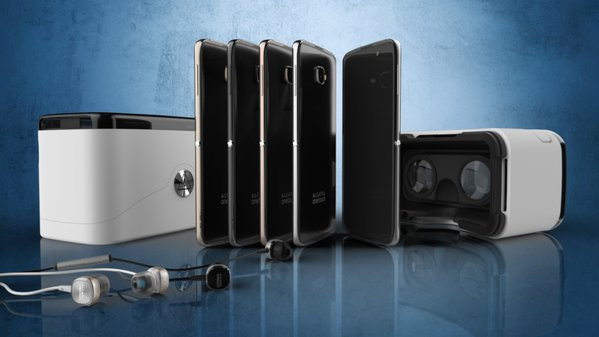 The leak itself obviously doesn’t tell the full story here, but it does make a lot of sense given what we’ve been seeing from Alcatel in the last few weeks. The packaging that contains the Alcatel OneTouch Idol 4S smartphone, carries the necessary lenses and headband to allow the user to utilize it in a secondary fashion as a Google Cardboard VR headset. Alcatel has recently used its own website to push out a few “leaked” specs of the device, along with the “Your World Augmented” tagline. That ties in perfectly with this latest leak that suggests the plastic packaging hides a VR-based secret.

The treat isn’t just in the fact that consumers will be getting a unique box either. The official leaks, along with a few more coming in from other sources, seems to suggest that Alcatel means business with the OneTouch Idol 4S. The 5.5-inch device will have an octa-core Snapdragon 652 processor sitting alongside 3GB of RAM. There’s a 16-megapixel rear shooter with an f2.0 lens, as well as a microSD card slot for that all important expandable storage. A mid-range Android device, complete with VR headset, and all likely to come in at around the $400 mark? Can’t ask for much more.