Microsoft has been unusually quiet since the original announcement of their Windows 8 powered Surface tablet back in June. We have heard no new details regarding its most important aspect: pricing.

While Microsoft ponders over the final price of the Surface, a company by the name of FVIEW is prepping to launch a tablet that looks almost exactly like Surface, but runs on Android! Check out the details after the jump.

The discovery comes from our friends over at TheNextWeb in a form of a post in which they cite blogger Arvid Bux who – at this year’s IFA tradeshow – came across a promotional poster for a Windows PAD, took a photo of it and shared it online.

The poster shows ones of the official images of the Microsoft Surface, with its distinctive Metro start screen, back stand, and multi-touch physical keyboard. On its side, you see labels like IPS (In-Plane Switching; a display technology), Dual Core, and 1.6 GHz.

In addition to that, they are also promoting a 9.7” Media Tablet with similar specifications. 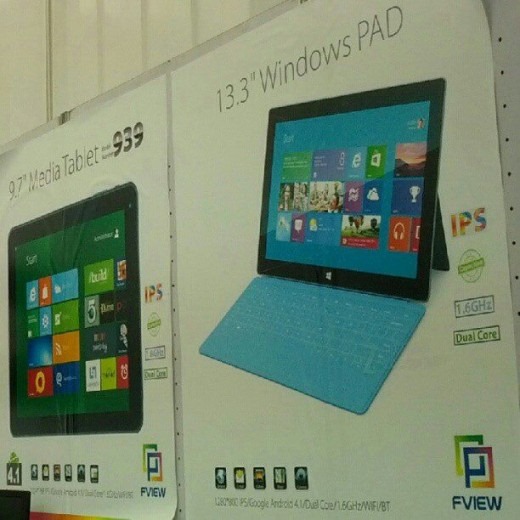 While there are no actual pictures of the device to judge its hardware quality, FVIEW’s tablet sounds like a really bad rip-off. The name “Windows PAD” is a bad attempt at getting people to associate this tablet with the iPad and most of the upcoming Windows RT-based tablets.

FVIEW doesn’t even have a website to show its products; just a support forum over on mobilestore.be/fview where you can discuss “7 inch Tablet PC / Pro” and “10 inch Tablet PC”. The 13.3” Windows PAD and the 9.7” Media Tablet isn’t mentioned anywhere.

Microsoft is very strict about who gets to power their tablets with Windows RT, so it’s no doubt FVIEW didn’t get to join the exclusive club.

If you know anyone who is looking to buy a cheap tablet, direct them towards the $199 Nexus 7. Knockoffs come with a similar price tag, but they have terrible build quality and no software support. They just aren’t worth it.