The Galaxy S III handset brought with it a wide level of excitement from Android users who couldn’t wait to get their hands on the powerful new device, but also from the wider technology loving community who couldn’t wait to see which direction Samsung had taken with the successor to their insanely popular Galaxy S II smartphone. Judging from the sales figures of the S III, it doesn’t look like consumers have been disappointed with the hardware, but there was one feature that was widely expected to be included, and was notably missing in action at release.

Apple had  paved the way for heavy cloud-based storage integration in mobile devices with their fantastic and always developing iCloud service that allows users to backup the majority of their information to Apple’s data centers, meaning all info can be synced across multiple devices in real-time. It also provides users with the peace of mind that they so badly crave when it comes to their valuable data and media such as contacts, documents and photographs. In the run up to the launch of the Galaxy S III, it looked as if Samsung were going to follow suit and bundle their own cloud service onto the device, rumored to be called S Cloud.

For one reason or the other, the S Cloud dream didn’t come true for users in May, but it is something which Samsung device users have to look forward to as it has made its first public appearance on the newly announced Galaxy Note II. As is so often the case with little nuggets like these, the existence of S Cloud has been found buried in the settings menu of the Note II and appears to come with the options of allowing users to backup photographs and videos as well as deciding whether or not to save that data intensive content over Wi-Fi or Wi-Fi and cellular data. 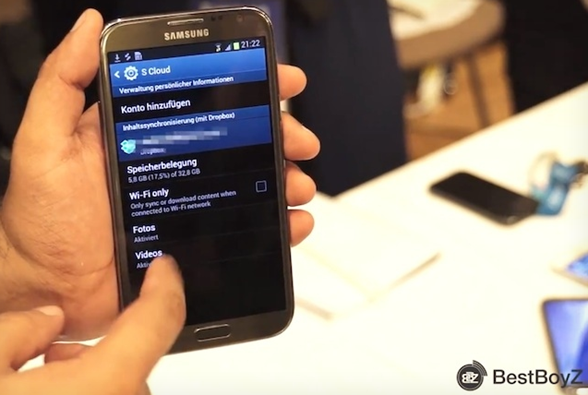 Rather than rolling their own data centers and housing all of that backed up information themselves, it looks as if the S Cloud service will make use of the Dropbox cloud storage service with existing users of Dropbox being able to supply their credentials or sign up for a free of charge account that offers an initial 2GB of storage space. When the Galaxy S III was released without the inclusion of S Cloud, it was speculated at the time that Samsung was not able to secure a cloud storage partner in time for the release. The heavy Dropbox integration that we are seeing in the settings menu of the Note II seems to suggest an accurate portrayal of the situation.

The discovery of the S Cloud menu settings should – at the minimum – give Samsung users hope that the service does exist, but it’s also highly likely that we will see this feature develop significantly going forward.