After years of iPhone users whining about the complete lack of any kind of  multitasking in iOS, Apple finally gave us all what we wanted when iOS 4 launched mid-way through 2010. But while Apple’s implementation works well, it’s not strictly multitasking – apps are held in a ‘frozen state’ and resumed when needed. A host of APIs and a tinge of jailbreaking fills in the missing gaps. 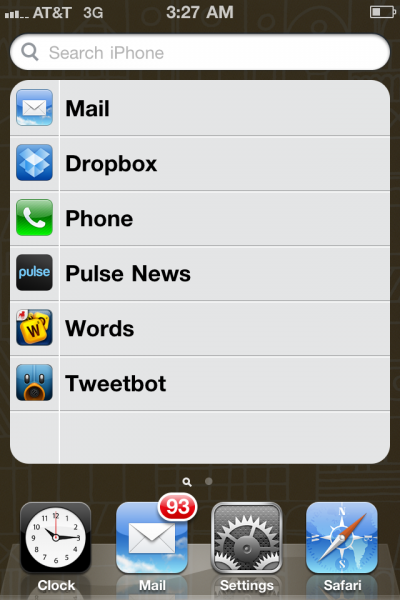 Another aspect of Apple’s implementation that felt the wrath of the geeks was the way apps were shown to be ‘multitasking’ as well as the interface for switching between them.

Apple introduced the multitasking tray – a double-tap of the home button would launch a row of icons below the Dock, with all apps available at the flick of a finger. It worked, but it wasn’t – and still isn’t – great.

A jailbreak tweak that’s currently available via Cydia, RunningList moves your multitasking applications to the Spotlight page of the homescreen, showing the currently running apps’ icons and names in a vertical list.

The power of RunningList is in its ability to show a long list of applications without the need to keep swiping to the side every five applications, just to find the app you use currently.

Add in the fact, RunningList can be tied into Activator’s gestures system and you have a ready-made replacement for Apple’s half-baked solution.

According to iDB’s Cody though, it’s not all good news.

For starters the Spotlight screen can tend to slow down when a lot of apps and their icons are being loaded, which is possible to be expected.

Cody also experienced apps ‘disappearing’ which, we assume, is something that could be fixed with an update to RunningList, but we’re not sure.

One thing we are sure about. For the price of absolutely nothing, RunningList has to be worth a punt!

Obviously you’ll need have a jailbroken iDevice to install Wraparound – check out or guide for jailbreaking iOS 4.3.3 untethered using Redsn0w right here. If you’re happen to be using the iOS 5 beta then you’ll be wanting our Redsn0w or Sn0wbreeze guides, but keep in mind that Sn0wbreeze doesn’t work yet with iOS 5 beta 2. Unfortunately both are tethered at this point for iOS 5.