Photography is now inarguably an integral part of the mobile industry. It’s one of the key considerations many prospective smartphone and tablet buyers make before going through the purchase process, and as well as the work of vendors in continually bolstering the camera hardware for a better overall performance, app developers have tried very hard to improve the software experience for the end user. One of the Galaxy S4’s many exclusive features was its ability to snap images almost simultaneously using the front and rear snappers, aptly named Dual Shot, and now, the aptly named Frontback app offers a similar service to those on iOS.

It’s amazing that, with front and rear cameras having been present for a good few years now, such apps have not been so commonplace. As Samsung rightly pointed out upon the launch of the Galaxy S4, utilizing the front and rear cameras at the same moment serves as a great way to record a reaction to a sighting, and also helps add some context to whatever subject it may be that you’re snapping. 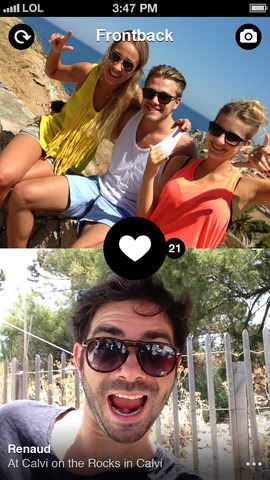 Often, having a facial reaction is just as good, if not better, than writing a caption, and it’s certainly less time-consuming. Frontback is, in many ways, essentially a clone of the Dual Shot app from Samsung, and it does its job rather well. 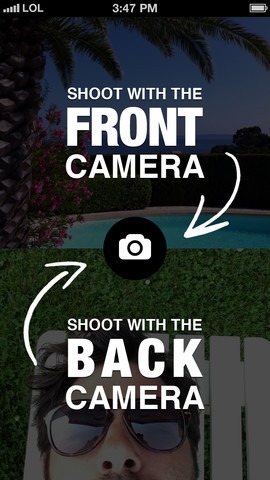 Although it doesn’t actually take the shots at the same time, it’s close enough to do what it purports, and with a neat, intuitive interface, you’ll have plenty of fun making your split-screen images. The idea, should you have ever needed to be reminded, is to curate the one image ready for sharing, and by sharing, we’re talking Instagram and Facebook. 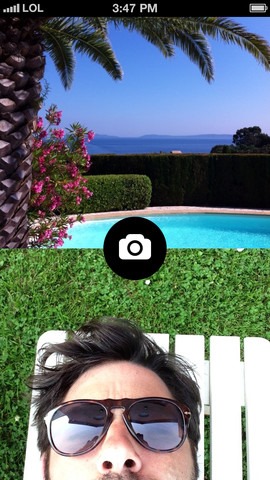 Still, while there are plenty of apps out there aiming to help you edit your snaps before you post them to your favorite social networks, Frontback is one of a kind, and since it is free of charge, you’ve nothing to lose in checking it out.

Previously, we did cover DuoCam for iPhone which offers pretty much the same functionality, but Frontback for iPhone has much more cleaner interface, and has that fun factor to it.