Will the next Apple smartphone be called the iPhone 7 or iPhone 6s? With reports flying around the Internet suggesting that Apple’s next smartphone will carry the ‘7’ moniker, a new video of an iPhone 7 concept has just hit the Web, hinting at some design and feature elements that Apple could take a look at.

Recent reports have suggested that Apple could name its next smartphone the iPhone 7, given that the new device would be carrying some major internal changes, enough to drop the marginally improved ‘s’ moniker for the September bound phone. The concept rendering comes in from ConceptsiPhone on YouTube, and the result is actually pretty elegant as a matter of fact. 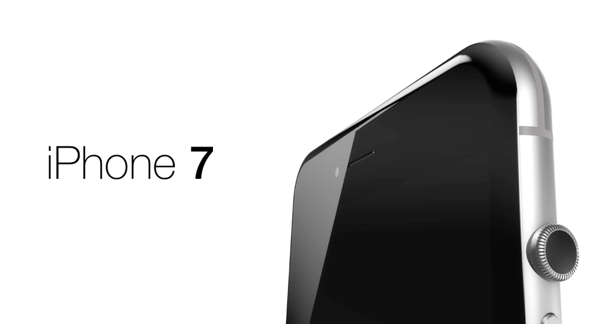 The existing design seems to have been carried over to the iPhone 7 concept with the same 2D glass and curved edges, but there’s some significant new features to be found here. ConceptsiPhone seems to be really impressed with the design of the Apple Watch, so much so that it carried over the Digital Crown to the iPhone as well, which looks down right slick. The practicality of the crown – which houses the Touch ID sensor and also serves as the Home button – is a bit foggy for now, given that the Digital Crown is really helpful on the much smaller Apple Watch.

The phone also houses new sensors for picking up on gestures, something that Apple has till now steered clear off. These sensors along with the Digital Crown will help in “adding a new level of control” on the iPhone 7. The designers seem to have the 5.5-inch iPhone 7 shrunk down to a thickness of 6.9mm only, and more so, giving it a pixel-packed 2K display. With the removal of the physical Home button / Touch ID sensor at the bottom of the phone, the body to screen ratio has slightly improved as well.

There have been plenty of iPhone 7 concepts in the past as well, and while most of the designs were pretty radical to be honest, this latest one seems to have built on existent proven pieces of technology, but the addition of a Digital Crown makes it a bit of an overstretch. Also, the new iPhone has been rumored to sport a new Force Touch technology for a pressure sensitive screen, which this concept has skipped on.