This Ingenious Case Turns iPhone Into A Stethoscope [Video]

Apple’s iPhone has made its way into all kinds of weird and wonderful places, as has its larger brother, the iPad. With accessories that help turn the iPhone and iPad into anything from a professional video tool to a high-grade medical devices, there’s little that Apple’s devices can’t do.

Speaking of medical devices, Jimmy Fallon’s ‘The Tonight Show’ was the place to get a glimpse of a new medical accessory recently, with inventor and 15-year-old CEO Suman Mulumudi taking to the stage to show off his latest creation. 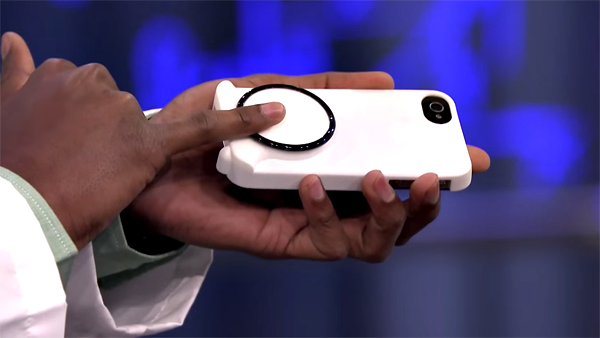 Showcased as part of the show’s ‘Fallonventions’ segment, the Steth IO was one of the products shown as part of a theme that sees young inventors get their 15-minutes of fame, sponsored by GE. Mulumidi and his father are working to bring the Steth IO to market alongside another product, LesionSizer, which aims to reduce unnecessary stents in angioplasty. The pair are currently part of a startup called StratoScientific – a company that may well be worth keeping an eye on over the coming years.

The Steth IO works by using a diaphragm that captures the sound of a heartbeat and then routes it to the iPhone’s microphone. An app then records that audio and plots the results on the handset’s display for reading by a physician. The whole thing is self-contained and actually looks pretty cool. We don’t expect to be seeing them in an Apple Store any time soon, though.

Mulumudi’s company, StratoScientific, recently won top honors at a WTIA Spring First Look Forum where it beat out competition from another 14 startups at the event – no mean feat in itself.

It’s amazing what people can do with a smartphone these days. Just imagine what people will be doing with an Apple-branded smartwatch at some point, too.

Check out the video below and drop us a comment on our Facebook and Google+ pages what you think about it: