This Infographic Shows The Evolution Of Microsoft Windows From 1985-2012

The next couple of weeks will undoubtedly be all about the future of Windows with the launch of Windows 8 and Microsoft’s Surface tablet coming on October 26th, but this rather informative infographic gives us a chance of taking a walk down memory lane and seeing the evolution of the company’s much-loved software.

The launch of Windows 8 will see the world’s most popular operating system enter its twenty-seventh year in the public eye, beginning back in 1985 with the launch of the 16-bit Windows 1.0 that marked Microsoft’s first attempt at producing an operating environment that was capable of multi-tasking. Originally released in November of that year, Windows 1.0 was finally replaced in 1987 with Windows 2.0, although that doesn’t seem to have made it onto the chart for some reason. 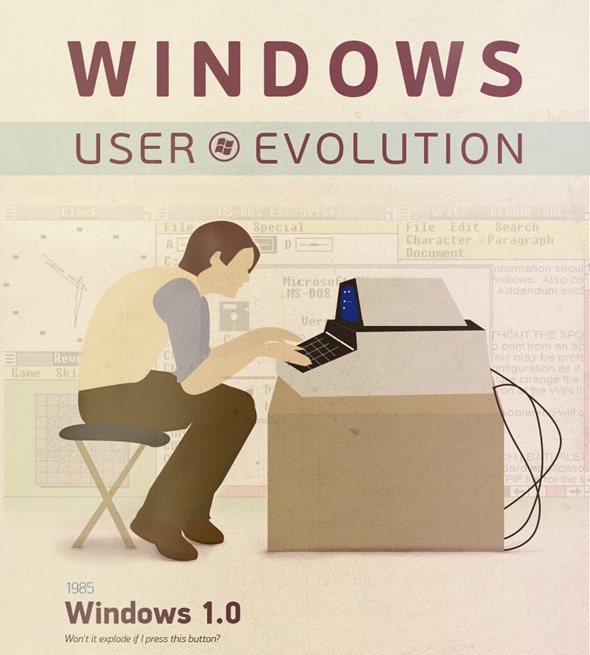 Ten years down the line and Microsoft used all of their experience and expertise to introduce Windows 95 to the world, a product that was a significant improvement over anything else that they had ever created back then. Rather than waiting an additional ten years between major OS releases; Microsoft quickly followed up three years later with Windows 98 that shipped with Internet Explorer 4.01, as well as other programs like Outlook Express, Windows Media Player that would become essential parts of the Windows experience.

Microsoft welcomed the new millennium with Windows 2000, an operating system that actually hit RTM just before Christmas of 1999. In September of 2011, Microsoft released Windows Me (Millennium Edition), which had loads of improvements over Windows 2000, such as the inclusion of Internet Explorer 5.5 and Windows Media Player 7. The fantastic Windows XP followed hot on the heels of 2000, hitting the marketplace in August of 2001, bringing a new task-based user-interface and designed primarily to dramatically enhance the user-experience that had been dished out with previous versions of the system.

Windows Vista, launched in 2007, and Windows 7 that hit shelves in 2009 finish off the evolution of Windows and takes us up to the current time and the anticipated arrival of Windows 8. This latest version of Windows is definitely the most advanced and ambitious release to date and comes at a time when there is so much competition and emphasis being placed on the industry. Microsoft is advertising Windows 8 as “Windows reimagined“, and with an entirely new look and feel to it, along with built-in support for touchscreen computers and tablets; it’s hard to argue with them on that one.