Thought 10.1” was too big for a tablet? Try a 23” one. Yes! Hacked together by Martin Drashkov, the MegaPad is, from what knowledge we have, the world’s largest Android tablet. 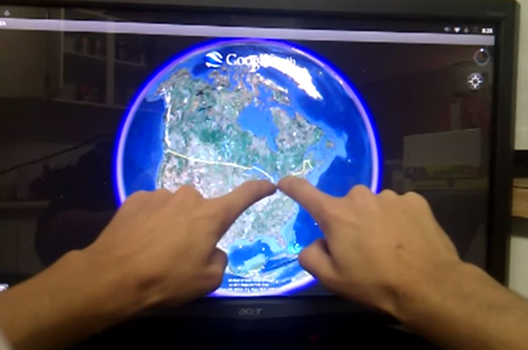 The news of the mega tablet comes from Phandroid – a blog dedicated to covering all things Android. Produced by one Martin Drashkov, this 23” tablet – appropriately named the MegaPad – is based on Android 2.3 Gingerbread and packs a GPU powerful enough to run 3D graphics-heavy apps like Fruit Ninja and Google Earth without any issues at (what we’re assuming is) high-resolution.

The Android MegaPad is then the next logical step – a modern touch-based computing device with with a screen size that will enable a whole different set of experiences. Unlike tablets, devices like this will make simultaneous use by two users a practicality and will let users more fully immerse themselves in apps and games. In the demo video below, you can see two apps that, while written for phones and tablets, nevertheless demonstrate the usefulness of such a device.

No technical details regarding the MegaPad have been revealed yet, except that is is based on Android 2.3 Gingerbread and that the display is a 23” touchscreen monitor from Acer.

It took a “few weeks” for Drashkov to put all the parts together. He believes that this sort of huge-screen fixed tablets will become the mainstream computing device in the next few years and that apps that will make proper use of larger-than-life touchscreens will enable a “whole different set of experiences”.

The apps shown in the video (embedded below) are Google Earth and Fruit Ninja, both of which are meant for small screen devices but have been shown to work unusually well on the larger 23” multitouch screen that is used in the MegaPad.

Drashkov states that it took a total of $600 and some commercially available “off-the-shelf” components to get the MegaPad ready. He chose Google’s Android OS for this project because of its (relative) openness that allows it to be used on all sorts of hardware.

Technical details regarding the MegaPad will be unveiled later on, and we hope to inform our readers as soon as said details are available. If Drashkov posts a guide on how to install this on your own multitouch monitor, then we’ll publish that too! Stay tuned!