This Guy Has Started Camping Out For iPhone 5, Gets £40,000 Worth Of Freebies

As part of a publicity stunt, ex-binman Rob Shoesmith, dubbed ‘Britain’s Biggest Blagger’, has managed to nab £40k’s worth of goodies donated by companies. His plan? To camp outside the Apple Store for three weeks around the launch of the next iPhone and test all the products he manages to get.

His only rule is to not pay for anything throughout the duration of the experiment – not even food (he encourages generous users to bring him along a bacon sandwich). The more media attention he’s getting, along with the inevitable rush of people en masse to the store when the new iPhone does finally debut, the more it certainly makes for a rather good bit of promotion not only for himself, but the companies dishing out the freebies. Whenever something is donated, he adds information about it to his blog. With over 20,000+ hits at such an early stage, the potential promotion value is only set to increase come September, and it’s easy to see why companies are tripping over themselves to hand over the goods. 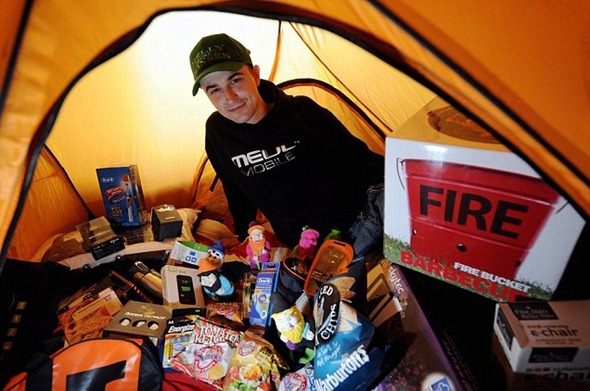 Shoesmith first hit the headlines when he won an iPhone app design competition, and quit his job as a refuse collector three weeks ago after being appointed marketing executive for Medl Mobile, which creates iOS apps. He has thus far collected a whole host of items from scented candles to a £20,000 loaner Chevrolet car. He said, “People might look at this and say that I’m being greedy but I want to prove that it can be done in the most over-the-top way.” Parcels arrive at Rob’s front door virtually every day. “The postman doesn’t like me right now,” he added, while envelope containing a tub of Brylcreem hair gel (A bit of a downgrade since the days of David Beckham promotion!).

The he sees the stunt as a great way of networking with companies, but, being a big fan of Apple, he wants to be the first to get his hands on the new device. At least his campaign can bring some entertainment and help alleviate the stress of what is a more serious sport of queuing up to be the first to get hold of the new iDevice, which certainly brings in the crowds.

He plans to donate re-usable items to charity once the experiment has run it’s course.

The next gen iPhone is expected to launch in fall, or in the next couple of months. It will be the successor of the iPhone 4 with added confusions of its design, whether it would be new or the plain ol’ iPhone 4 one. Who knows, fall here we come!

(via Metro UK | Thanks Mark Gurman)