Apple and Google have shown extreme willingness in their efforts to try and reinvent the living room through the use of innovative technology. Google has a growing number of manufacturers building Android-powered set-top TV boxes and sticks that connected directly into an HDMI port on a television set. Apple is also in on the action with the extremely popular fourth-generation Apple TV that ships with tvOS and an accompanying App Store. Both offer app installations and game downloads from their respective app stores, and both could do with an awesome gaming controller for all those downloaded games. Step forward the extremely retro-looking wireless gaming controller from 8Bitdo; the NES30.

It’s not going to win any prizes or any fans based purely on its name, but let’s be honest, no-one is really going to care about what this thing is called. It is however likely to garner a lot of attention and immediate love from hardcore old-school gamers who absolutely loved the look and feel of Nintendo’s NES gaming controllers from back in the day. This particular gadget may have been built with the modern world and mobile gaming in mind, but it stays true to the original design by offering that “same NES touch, same NES feeling”. 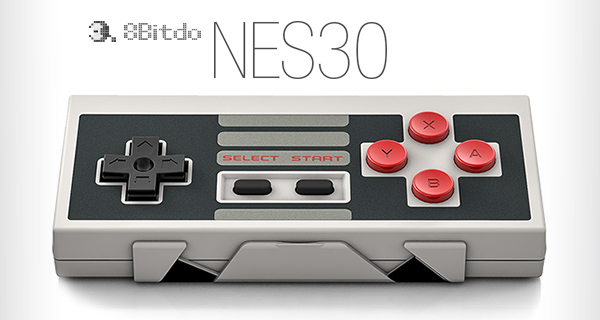 As you would expect from a wireless gaming controller, the hardware comes with integrated Bluetooth technology. That essentially means that it offers compatibility with the iOS and Android mobile platforms, as well as desktop operating systems like Mac OS X and Microsoft’s Windows that’s installed on laptops and desktops around the globe.

From a feature perspective, the controller offers a fair amount of flexibility to users. There are upgradeable firmware options, dual-mode support that includes Bluetooth keyboard and touch-screen simulation, and even programmable keys so you can set it up exactly how you want to your own personal taste, according to the emulator you are using for playing games.

If you’ve been in the market for a Bluetooth gaming controller for iOS, Windows, Android, OS X that offers a little bit of personality mixed with some excellent features and retro looks that cast you back to your youth of playing Donkey Kong, then this little rectangle piece of kit could be exactly what you are looking for.