The latest beta of iOS 5 was just released, and as we’ve reported before, it includes improvements all across the board. Now, according to a prominent developer in the jailbreak scene, it’s easy to send tweets directly from the system’s home screen.

This was revealed by qwertyoruiop, a 14-year-old developer most known for creating iOS tweaks, such as UISettings, the first ever publicly available widget for iOS 5, allowing users to access several system settings, such as adjusting the brightness, turning Wi-Fi on and off and even respringing the device, without ever having to launch the Settings App.

iOS 5, which was announced at Apple’s Worldwide Developers Conference earlier this month, includes several across-the-board enhancements, one one of them being system-wide Twitter integration. According to a tweet posted by qwertyoruiop, this new enhancement (or rather a plain ol’ Cydia tweak as we call it) in Beta 2 allows users to just tap their home button, while they’re in the Home Screen, send out tweets to the rest of the world, simple as that. 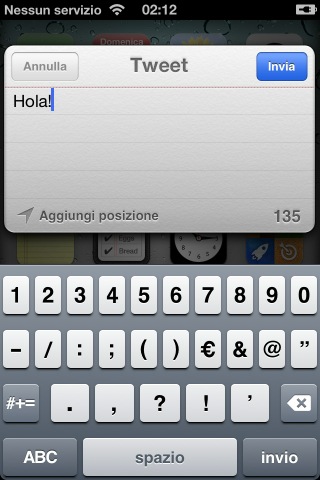 According to those who’ve tried this out, this tweak still has its bugs, but that’s to expect. Still, this is a really easy way to send out tweets without having to launch the full-fledged Twitter App.

Activating Twitter integration is as easy as modifying a setting. Just go to Settings > Twitter and login with your account (you’ll only need to do this once). You can also add multiple accounts, if you wish, install the full-blown Twitter App and even update your Address Book contacts with their Twitter details. After this initial setup process, you’ll be able to tweet out pictures, videos and links to web pages, as an example, all from their respective built-in Apps.

Although only Twitter integration has been marketed by Apple so far, some developers have discovered that the first Beta of iOS 5 was also capable of integrating with Flickr, Facebook and even MySpace, albeit with a few bugs. It’s still unclear whether the final version of iOS 5 will include support for such networks, or if Apple has abandoned the idea altogether.

That question will be answered once the final version of iOS 5 is available to customers this fall. Meanwhile, a few more beta versions are expected to come out when iOS 5 hits the final version sometime in Fall, maybe even with greatly enhanced social integration. We’ll have to wait and see.

How many users will be converging on to Twitter once iOS 5 comes out?