As an avid user of both iOS and Android-based devices, I am pretty pleased with what they can achieve at stock level. Having said that, the real fun arrives in what can be done to extend the capabilities offered as standard, and I am constantly amazed by some of the apps and modifications one can perform to make a smartphone even smarter.

As is the case with many Android users, I frequently check out the Android knowledge-base that is XDA Developers, and today stumbled across an app which takes smart to a whole new dimension.

One thing I’ve noticed about both Google’s Android and Apple’s iOS operating systems, is that while both offer very generous settings panels from where you can modify most aspects of a device, it’s not actually possible to tinker with apps on an individual basis.

Let me give you an example. When using, say, a browsing app, I may want my screen to never time out, for obvious reasons such as reading a passage or checking a live update. Similarly there are other apps whereby I don’t see the necessity in having the screen awake for lengthy amounts of time, and although this is an issue for a lot of mobile device users besides myself, there is precious little that can be done about it.

Well, nothing could be done until PerApp, which, as the name entails, allows one to tailor settings to specific apps. arpruss, a frequent member of the XDA forums, searched high and low for a way to modify actions based on apps, but having found precious little, decided creating PerApp, and was the way going forward. And boy, are we glad he did. 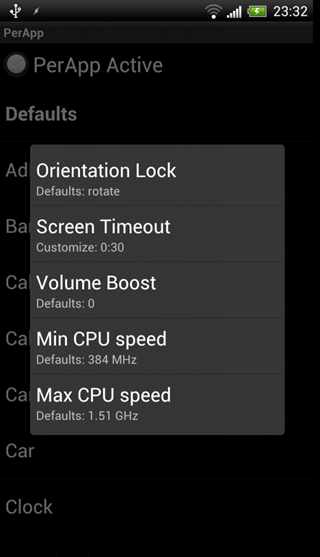 With PerApp, one can boost volume, lock orientation, and change the screen timeout length for whichever app, and it’s none to complex to get the hang of. So if you’re running a third-party video player, for example, you can now set it to landscape-only, rather than having to make such an adjustment each and every time.

If you wish to give PerApp a try out for yourself, please head over to the official application thread over at the XDA Forums.