We’ve seen the drop tests, we’ve shrieked at seeing iPads doused in molten lava, but those intent on destroying their beloved gadgets never cease to discover new ways of bringing scratches, dents, and general harm to the most sought-after mobile devices on the market. In this case, the Samsung Galaxy S III is dragged along by a moving car in order for the tester – YouTuber “aperfectgalaxy” – to prove the incredible strength of the newish device’s screen, and in order to give a sense of perspective, an iPhone 4S is also hauled along for the ride in what is known as the “scratch test drag race”.

Seeing new devices destroyed is bad enough, but this guy takes things to the next level by unboxing them less than a minute before the test. The Galaxy S III, which was one of the most sought after Android releases of this year, has its box hurriedly ripped open, and the cellophane is the abruptly ripped off, as if it’s a sandwich as opposed to a $600 device. 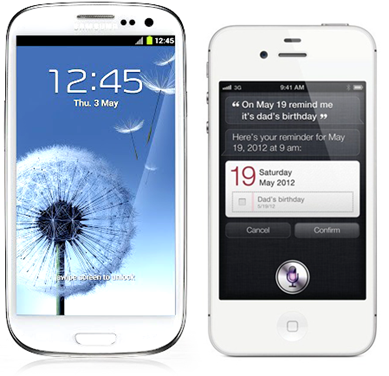 His friend then pulls up in a Vauxhall Corsa, and our guy opens the boot and attaches the devices to two separate pieces of string, each of which has a large bit of duct tape at the end, for sticking to the device. The pair then embark a short journey, although when a smartphone is in such a precarious position, it actually seems like quite a long time, and once the Barbary has finally ceased, the test appears to prove the Corning Gorilla glass of the Galaxy S III is by far an away the winner, looking largely unscathed compared with its Cupertino-made counterpart.

Incidentally, the S III has tended to have been beaten by the iPhone in the several drop tests we’ve already seen, although due to the unfair nature of the tests, there’s no way of telling if that is a fair reflection of the strength of Samsung’s flagship smartphone.

This time around, Samsung’s S III certainly looks the stronger of the two, but we here at Redmond Pie do not advise – or advocate – dragging your smartphone behind a car. Still, if you do, make sure you film it and post it on YouTube!