Modern technology is great when it’s making our smartphones smaller and our tablets faster, but where it truly comes into its own is when it empowers people. The world of prosthetics is exactly the kind of area where technology can, and indeed does make true, life-changing leaps.

Japanese manufacturer Exiii is doing its bit with the Handiii bionic limb. Created using an entirely 3D printed exterior, the arm costs just $300 thanks to the way it is produced. By cutting down on production costs Exiii has made the limb into something that almost anyone can afford. But that’s not the best bit about this particular piece of wunder-tech. 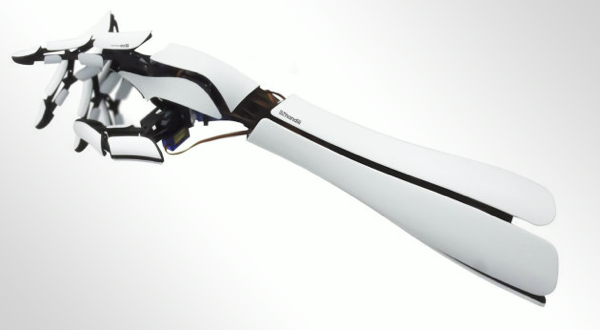 Another way of keeping the costs down is to move the processing power required by such a bionic limb elsewhere. Say, a smartphone.

The way the Handiii limb works is to have an EMG sensor that detects electrical impulses that come from a user’s existing limb stump. Those impulses are then transmitted to a smartphone or tablet for interpretation and the required movements are carried out when the commands are sent back to the limb. By using the smartphone or tablet’s processing power Exiii manages to keep costs down thanks to the fact it doesn’t need to put the processing power inside the limb itself. Oh, and this all happens wirelessly too, just like magic.

Right now the Handiii limb is on back order because Exiii can’t make them fast enough. It appears the company is focussing on getting its wares into the hands of industrial researchers rather than the general public at the moment though, with the aim of possibly making the whole thing open-source, something that has also been spoken of. Given the amount of cash this kind of thing could potentially generate, that would be quite the donation to the open source community and amputees the world over.