The iPhone 5’s announcement is almost upon us, and although we’ve seen prototypes of the upcoming smartphone measured up against the current iPhone 4S on numerous occasions, many of the images and videos released hitherto have been far from clear. Now, though, parts and repairs company iResQ has fully assembled an iPhone 5 using various bits and pieces it has received, and offered the anxious tech world a very up-close and personal look at the next-gen Apple smartphone compared with its predecessor.

The images show, perhaps more clearly than any others we’ve seen, just how much thinner the new device is when compared to its older brother. It’s suggested the iPhone 5 has had around one-fifth reduced in terms of depth, while packing in a whole host of upgraded, more efficient hardware specs.

Having already showcased most of the newer device’s innards, iResQ slapped a front panel on the front to reveal what we’re almost certain will be the final design. The form factor has, based on leaks, been met with a positive reception by iPhone fans far and wide, and although iResQ decided not, unfortunately, to give us a glimpse of that beautiful aluminum back panel, the key differences between old and new are clear for all to see.

The smaller device is said to be an iPhone 4S, although looking at it closely, it does seem to be an iPhone 4. Nevertheless, the difference between the two – from an aesthetic point of view – is almost non-existent, and for the benefit of this comparison, the iPhone 4 most certainly does the trick.

The iPhone 5 is lot slicker from the side view showcasing the volume buttons and silent switch, as you can see from the image:

The larger screen has stretched the device, rendering it a little longer than before. By also utilizing the Nano-SIM and 9-pin dock connector, Apple has been able to shuffle hardware around – providing a thinner device in spite of the more powerful components. As you can see from this end-view, it looks every bit the next-gen device: 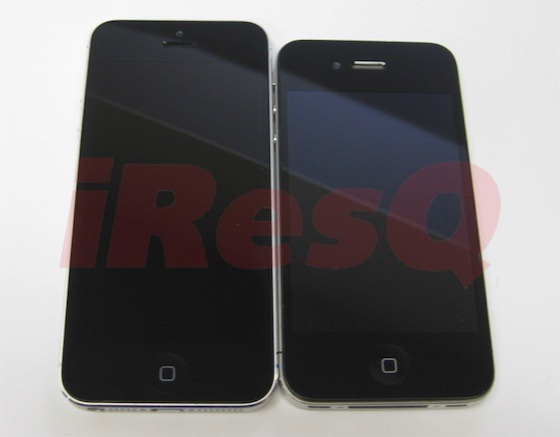 The asymmetric look will surely knock a few noses out of joint, but given the rest of the device is as slick as they come, there’s little chance those pining the new iPhone will see it as a deal-breaker.