With likes of Sony and Samsung having revealed their latest and greatest devices at MWC last week, it will soon be the turn of Taiwanese outfit HTC to showcase its eagerly-awaited successor to the critically-acclaimed 2013 release of the One. Thanks to numerous leaks, we already know most of the key details of the device, known technically as the ‘HTC M8’, including its stronger processor, larger display and two rear-facing cameras, but with the unveiling set for March 25th, we’re going to be waiting a good few weeks beyond that for its release. If patience isn’t your forte, perhaps you might be interested in yet another nifty bit of fakery from resident knockoffer Goophone, which has come through a respectable clone of the as-yet unannounced handset. Check it out after the break!

Although we’d never actually buy one of these fake phones, it’s interesting to note just how far they’ve come along over the past few years. Not so long ago, you’d get a device vaguely evocative of the real thing, but from a technical point of view, a very poor rendition of the real product. However, in more recent times, the improved build quality has been matched by generally respectable tech. specs, and at usually a fraction of the cost – as is the case with the Goophone M8 – it’s no wonder this company and others like it do so well in certain parts of the world.

Goophone’s take on the forthcoming ‘HTC One 2’, as some have unofficially dubbed it, offers only a single rear-facing camera as opposed to the two that the real device will pack, and with capacitive buttons rather than the on-screen keys we’re expecting from the soon-to-be-announced flagship, the Goophone M8 is actually more like the original HTC One.

Still, with a decent processor, 1GB of RAM and support for 3G cellular data, it has that mid-range appeal, and for $230, it’s a great deal less expensive than any high-end handset you’re likely to find from a respectable vendor. 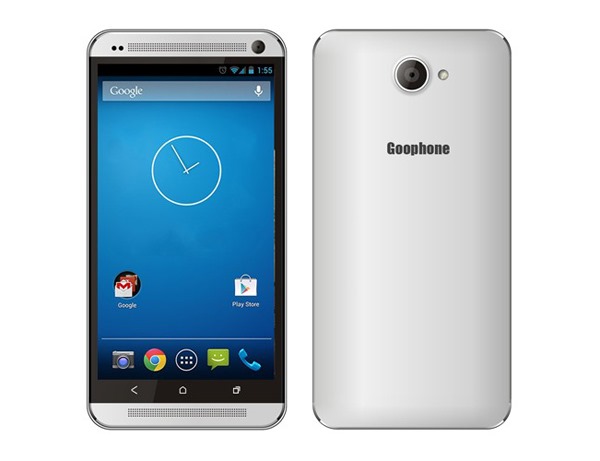 And, in the spirit of the times, it also comes in gold, but after Apple and Samsung both indulged us in the fashionable shade, it’s unlikely that HTC will feel the need to follow suit – particularly since the company likes to be edgy and different with its UltraPixels, BoomSounds and dual cameras.