Around this time last month, the tech. world was abuzz with reports that the iPhone 6 Plus was susceptible to accidental bending when placed in a pocket. Naturally, a furore ensued, with Apple fanboys and haters alike taking it in turns to exchange e-blows, but after a week or two of tit-for-tat, the whole “saga” died down. Still, with the original viral video having garnered a considerable number of views on YouTube, it’s no surprise that we’ve since been treated to several other bend tests relating to a number of other handsets, and with Apple’s iPad Air 2 having just been announced, it was only fitting that the new and improved slab was given the same treatment.

Given that a tablet is not going to be placed into a pocket – unless you’re some kind of giant, that is – a bend test does seem a tad nonsensical. But given what’s been happening recently, there was always a lingering inevitability that someone was going to do it, and in this instance, YouTube user Marvin Macht has seized the initiative. 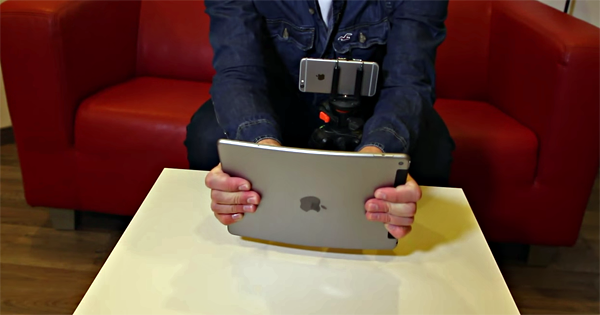 Not only was it predictable that the A8X-packing slate would be bent for the sake of entertainment, but the outcome of the actual test offers precious little by way of surprise. Whereas the iPhone 6 Plus tested by Unbox Therapy was bent out of shape, Macht’s iPad Air 2 looks a complete write-off after being placed under such intense stress.

Unlike with the iPhone 6 Plus, though, we strongly doubt that Apple will feel compelled to enlighten us on the numerous tests carried out to ensure that its products are robust enough to cope with the day-to-day. Why? Because this isn’t your everyday occurrence, but rather a mindless act of violence on an otherwise great tablet, and with the wider audience likely to be going out and grabbing the new iPad Air 2 and iPad mini 3 over the next few weeks and months, expect more weird and wonderful destruction videos as folk dream up new ways to smash up their high-end tech.

By the end of the clip, the iPad is completely wrecked, with pieces of the display strewn all over the desk. It’s a swift, yet painful end for a device that has not long been announced, less made available to the masses, and if you ever needed assuring that your tablet is not, in fact, bend-proof, here it is: