The Mozilla team has been busily updating and improving its revered Firefox browser, with more frequent release cycles in place to ensure it maintains competitive with the likes of Google’s Chrome. As planned, the foundation has released version 1.0 of the Firefox OS Simulator, and by means of a blog post, Mozilla has also introduced per-window private browsing via the Firefox Nightly channel.

It’s no secret that Mozilla is in the process of building its own mobile operating system. The Linux-based OS offers an environment based on Gecko, and from what we’ve seen, looks like an amalgam of our two most popular mobile ecosystems – iOS and Android. The Firefox OS Simulator takes the form of a desktop add-on, allowing developers to preview and test out the forthcoming mobile offering, and having been released as a preview last month, is now offered as a much more usable, less bug-riddled package. Previously, you could take Firefox OS for a spin on your PC, Mac or Linux machine, but that required some technical skills, the just-released simulator simplifies everything.

In spite of its 1.0 label, it’s important to note that, at least for the time being, the “preview” moniker is staying, but don’t let that put you off trying out a simulator which now actually works rather well. If you want to try it out, click on this link, download, and navigate through Tools > Web Developer > Firefox OS Simulator. Once you’re there, simply click “start”, and you’ll notice a pop-up window from which you can preview the upcoming Firefox OS.

Having seen companies and organizations come and go in the fast-moving world of technology, I have to applaud Mozilla’s dogged fighting spirit, and the foundation is a true exemplar of what it means to continue innovating and improving products in order to remain relevant. With Google coming through with Chrome, Firefox could have simply rolled over, but instead, Mozilla has taken it to the Big G by offering a direct competitor to another Mountain View export – Android. And from what we’ve seen, there’s every reason to be excited about Firefox OS. 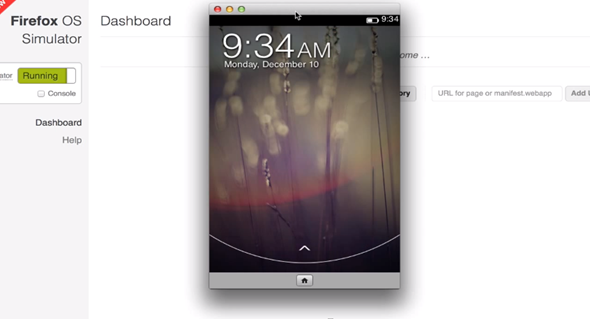 In other news, the Firefox Nightly channel details the ability to run private windows simultaneously with open ones. So now, those running Nightly builds can open a new private window without the need to quit the current session.