It seems that you can’t read a technology-based article, or visit a consumer technology store these days without having the expansion of wearable technology thrust in front of your face. Wearables are undeniably growing in popularity with a consumer base looking for the next big thing, but with an increasing number of company’s looking to get in on the action, the choice is spiraling out of control. Google’s Android Wear platform has a whole array of options being served up by various manufacturers thanks to its open nature, and now it has got a new luxurious addition thanks to a Google and Tag Heuer collaboration.

Watches are generally considered to be a very personal item. Consumers around the globe who have been looking for a smartwatch, but prefer to adorn their wrist with a little bit of luxury, have generally been forced to go with the high-end Apple Watch offering. Not necessarily because they prefer Apple’s ecosystem over that of the competition, but usually because devices built on the Android Wear platform have generally been designed and developed to a specific, strict budget. With Swiss-based Tag Heuer getting in on the act, that has all changed. 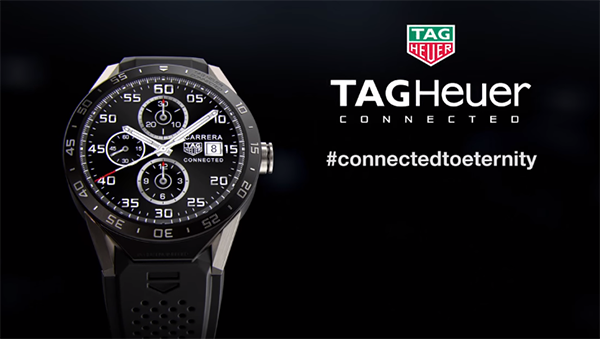 Tag Heuer doesn’t need any introduction to watch aficionados around the world. They exist as one of the biggest and most respected company’s involved in the timepiece industry. Now, thanks to the partnership with Google, the Swiss company has introduced the Tag Heuer Connected project; a Swiss-made intelligent smartwatch that is not only built on the Android Wear platform, but one that changes what we think a traditional “smartwatch” should look like. 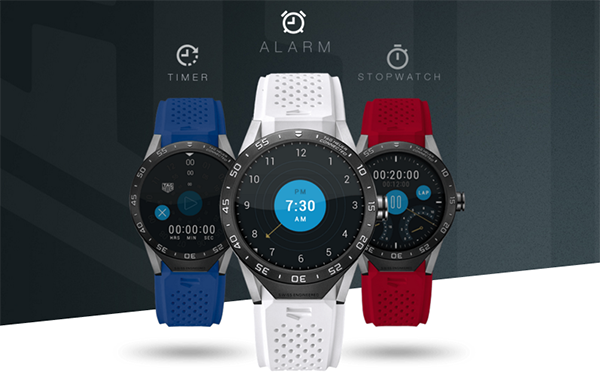 At first glance you’d be forgiven for thinking the Tag Heuer Connected, which was unveiled in New York today, was just a standard premium watch. It carries an extremely familiar looking aesthetic that deviates away from the digital displays of most smartwatches. The hardware is made of titanium with an included sapphire crystal display that sits at 46mm in diameter. So slightly bigger than the largest of Apple’s own intelligent timepiece. 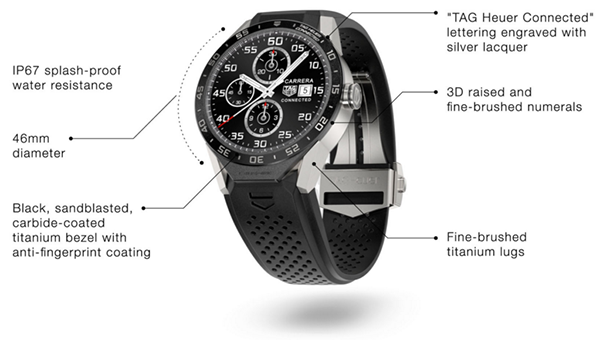 The display stands at 1.5-inch and sports a 360×360 pixels resolution coming in with 240 ppi. The watch is being powered by an Intel-based 1.6GHz dual-core processor and 1GB of RAM under the hood, but we can’t tell how that translates into actual performance for now. The battery is stated to be a 410mAh unit which should last for about 25 hours if we take Tag Heuer’s word for it.

Tag Heuer Connected is compatible with both Android and iOS smartphones. Those looking to purchase the hardware can expect to shell out $1,500, and for that they can choose from a choice of colored rubber straps. There are 7 color options: green, blue, orange, red, white, black, and yellow. Targeted towards the more fitness oriented crowd, the watch has also been given the waterproof treatment, which means it can easily be taken for a dive in your favorite lake or pool.

If you’re in the market for a premium smartwatch, and don’t want to hand over your money to the corporate juggernaut that is Cupertino-based Apple, then how about parting with $1,500 for a connected Tag Heuer. There’s definitely worse things to spend your money on. The watch can be ordered online right now from Tag Heuer as well as Tag Heuer boutiques.