Swing Copters: The Spiritual Sequel To Flappy Bird Gets A Release Date [Video]

You’d have to have been living in a cave earlier this year to miss the whole Flappy Bird saga. Becoming hugely popular on the App Store and Play Store almost overnight, Flappy Bird raked in huge sums of money for its creator Dong Nguyen on an apparently daily basis. Unfortunately that wasn’t enough to keep him happy though, and his newfound fame – or should that be infamy – caused him to pull the game and almost disappear.

Now though, after promising to make a return with a new game, Nguyen is set to do just that.

Titled Swing Copters, the new game takes what was so addictive about Flappy Bird and builds on it by adding new obstacles as well as moving, swinging hammers that gamers must avoid while trying to rack up as high a score as possible. 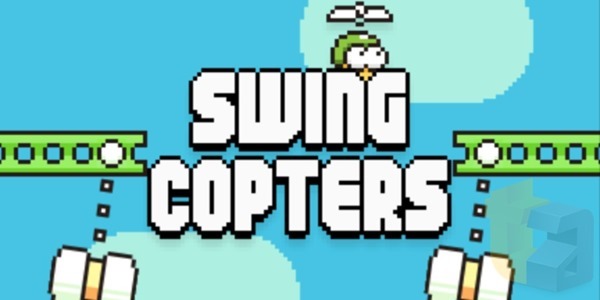 Still devilishly difficult according to people who have played it, Swing Copters forgoes the side-scrolling gameplay of Flappy Bird in favor or vertical scrolling that for some reason reminds us a tad of Doodle Jump. We’re pleased that Nguyen’s new game isn’t simply a new Flappy Bird game, but also that the new offering manages to retain some of the charm and head-bangingly frustrating gameplay of the title that it supersedes. We know that we can’t wait to give it a try, and expect to see it surge to the top of the App Store charts shortly after its highly anticipated release.

Swing Copters swings into the App Store on August 21st and will be a free download. Nguyen clearly wants to try and recreate the cash cow that was Flappy Bird though, because there will be a $1 in-app purchase for those that want to do away with the in-game ads.

Check out the preview of the game below and see for yourself what sort of misery you’ll be getting yourself into once the game bears fruit.

Found it annoying? Well, sorry to break it to you all, but that was just the video, imagine what the real thing will play like!