Here at Redmond Pie, we of course love our tech news. But as much as we enjoy following Apple versus Samsung, Facebook’s latest changes, or Windows Phone 8, what we really look forward to is that rare, ingenuous geeky product or concept that comes along only every once in a while. As much as it entertains us to see a new implementation to iOS 6 or a great Android mod, nothing in the regular flow of tech coverage could really compete with, say, a smartphone which also made toast. While we’re probably a way off a crispy, golden-brown breakfast accompaniment, one intuitive soul at a London university has created to type using a keyboard made out of paper. Sounds interesting? Read more after the break.

Florian Kraeutli, a student based in Goldsmiths, University of London has created his virtual keyboard for Apple’s iPhone by utilizing the accelerometer to pick up the vibrations caused by tapping or typing a surface. The device sits a short way away from the paper keyboard – close enough to feel the vibrations – and the accompanying app he developed translates the frequencies of the vibrations into intelligible key presses. 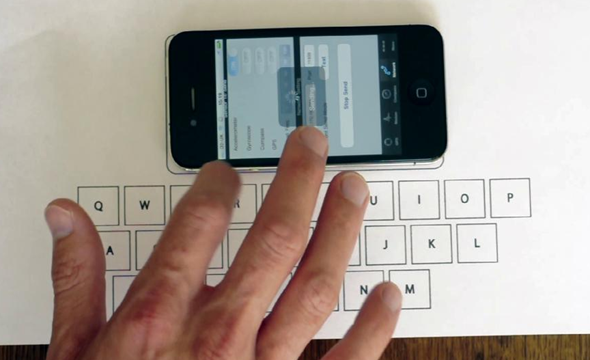 As you can see from the video demo below, the whole process is made possible thanks to the jailbreak of an iPhone 4 app, and in an interview with British news publication TheTelegraph, Kraeutli elaborated on his truly wondrous little invention.

The signals I’m collecting are very weak. At the moment it’s more of a proof of concept but if you made the accelerometer more sensitive you could improve the accuracy quite easily.

The work is part of a university assignment looking at user interfaces, and at this point, it’s not as accurate as he would like it to be. It’s currently accurate about 80 percent of the time, and he can only train a couple of keys to work at present. Still, when the accelerometers begin improving, hopefully he’ll be able to pinpoint keys more accurately, and thus develop a concept even more amazing than this one.

We’ve seen a similar idea before with laser keyboards, and although they might never have much real-world value, we certainly applaud the efforts of Kraeutli.