Steve Jobs Gifted an iPhone 4 to Russian President, And It’s Locked to AT&T Till Date

What would you call Jobs for this? A man who always plays by the book even if it’s the Russian President he’s dealing with or a complete douche bag? Speaking of playing by the book, if the iPhone has to be locked to the AT&T, it should be locked for the Russian president too. However, on the other hand, what’s the point of the gift which Mr. President couldn’t use till date. I just voted for the Steve Jobs as douche bag.

Back in June 2010, Russian president, Dmitry Medvedev, visited US during which he also got to meet up with CEO of Apple, Steve Jobs. To appreciate the efforts of taking out the time to meet him, Jobs gifted him an iPhone, locked to AT&T. 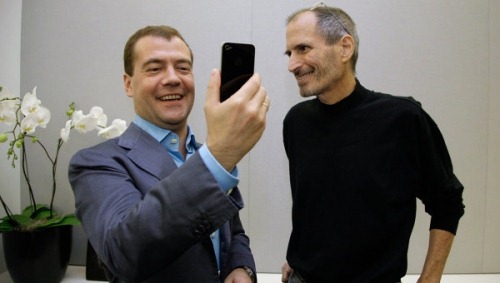 This was disclosed earlier this week in a tweet by the assistant to President, which read:

Translation of which is (according to Google Translate):

@babdima that the phone was flashing with AT&T, here – not working 🙂

Again, playing by the book or douche bag?