Every time when it looks as though the jailbreak development community is about to hit a saturation point, someone seems to come up with a new and inventive tweak which hasn’t been done before, bringing some pretty unique functionality to jailbroken devices. Once upon a time the stock repositories which provide the content on Cydia were updated at least a couple of times a week with excellent and innovative tweaks and extensions which dramatically improved the user experience of an iOS device. However, with Apple including new features in every update of iOS, and the community pretty much exhausting the tweak options, we have become used to seeing mediocre offerings appearing in Cydia with a gem appearing every so often.

We have been given early access to a tweak called ‘Springround’ by developer Andrea Oliva, which is set to hit the Cydia store in the coming weeks. Springround is an extension the likes of which we haven’t seen before and is obviously the result of some serious brain storming sessions between Oliva and his team. The main feature of Springround is quite simple – to provide access to the device Springboard everywhere. For those that may not know, the home screen view where application icons are located is referred to as the device Springboard and essentially acts as the main navigation and launching base for most activities on the device. 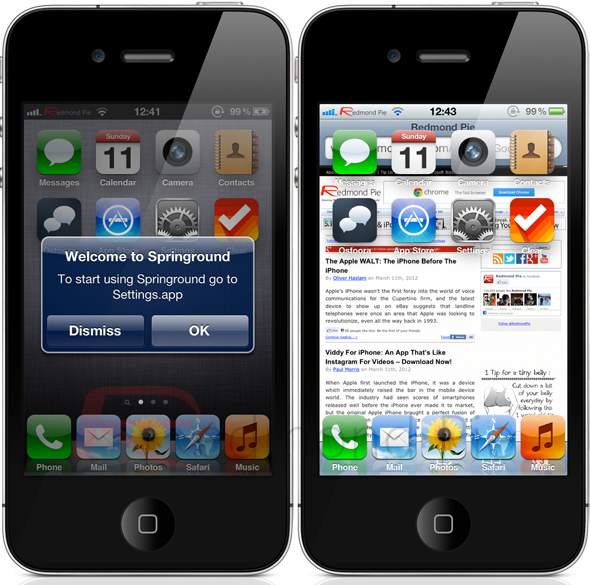 When an application is launched, the Springboard becomes invisible as the new app view acts as the primary input. In order for the user to make the Springboard active again, they need to exit the application by pressing the home button and exiting back to the beginning. Springround exists to alter that default behavior by allowing the user to set an Activator based gesture to invoke the Springboard which is then overlaid on the current application. All of the Springboard functions are available such as the ability to launch applications, remove apps through edit mode, Spotlight search ability as well as being able to change the apps order and access all standard folder options.

Springround installs with a dedicated preferences section, allowing users to set the activation method as well as determine whether or not app interaction should be allowed when Springround is invoked. I have been using a beta version of this tweak for a few hours and the Springboard seems to be extremely smooth when overlaid on the view and functions exactly as it should, being responsive and not showing any signs of lag on my iPhone 4S. When the home button is pressed, the Springround view is dismissed with a nice animation, adding to what is already a very polished tweak. 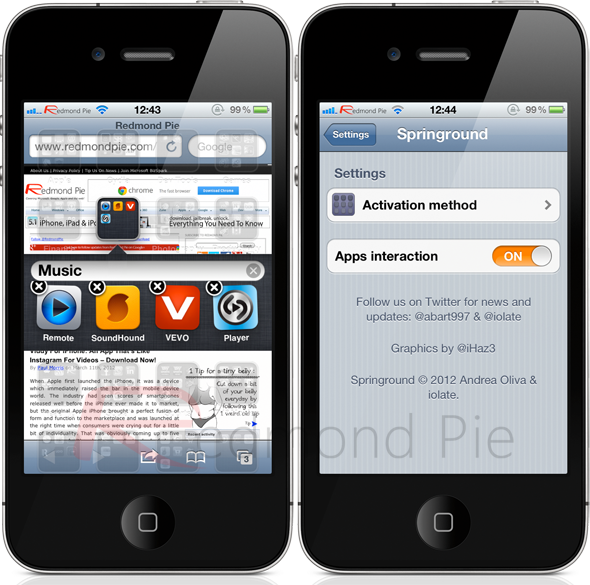 Springround is set to hit the Cydia store soon, with no current information being available on possible pricing or device / iOS compatibility requirements.

UPDATE: Springround is now available on Cydia under BigBoss repo.