Its finally here ! The newly released Skype 2.0 for iPhone enables the much awaited VoIP calls over 3G network. This feature though will only be free to use until August 2010, after which a small fee (via in-app purchase perhaps?) will apply. Carrier charges of course will cost extra. The official change log of Skype 2.0 is as follows. 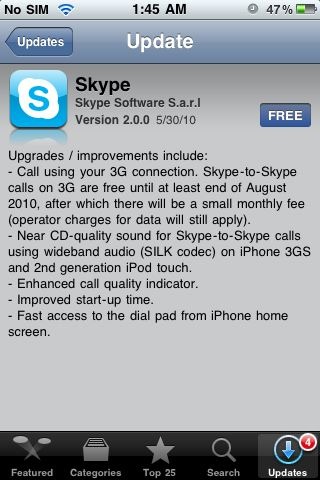 Upgrades / improvements include:
– Call using your 3G connection. Skype-to-Skype calls on 3G are free until at least end of August 2010, after which there will be a small monthly fee (operator charges for data will still apply).
– Near CD-quality sound for Skype-to-Skype calls using wideband audio (SILK codec) on iPhone 3GS and 2nd generation iPod touch.
– Enhanced call quality indicator.
– Improved start-up time.
– Fast access to the dial pad from iPhone home screen.

Skype for iPhone was first released back in March 2009 and since then has only got a few minor updates.