Here’s a guide on how to sideload install Popcorn Time app on tvOS for Apple TV 4. No jailbreak is required to get this working on Apple’s set-top box.

If you’ve been looking for an Apple TV app that allows the streaming of TV shows and movies without having to go through some of the most “official” channels or services, then the Popcorn Time solution could be just what you’re after. 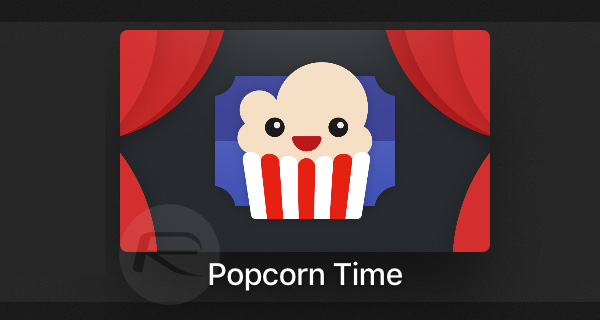 It may not be available as an easy download from the tvOS App Store for obvious reasons, but you can grab the code directly and compile to run it on an Apple TV. Of course in the first instance, all of this sounds a bit too intimidating but if you have the right set of software and hardware at hand, it should only take a few minutes at best. First, here’s what you will need to begin:

Step by step instructions are as follows: 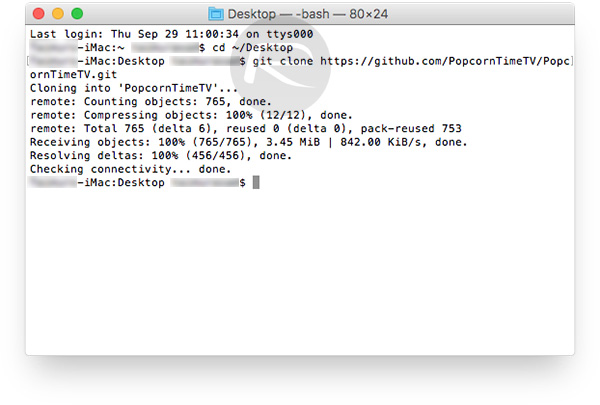 Step 2: This particular project has a number of dependencies, which basically means it uses third-party libraries and code that needs to be brought into the project via the Cocoapods dependency manager. To install Cocoapods, run the following command via Terminal: 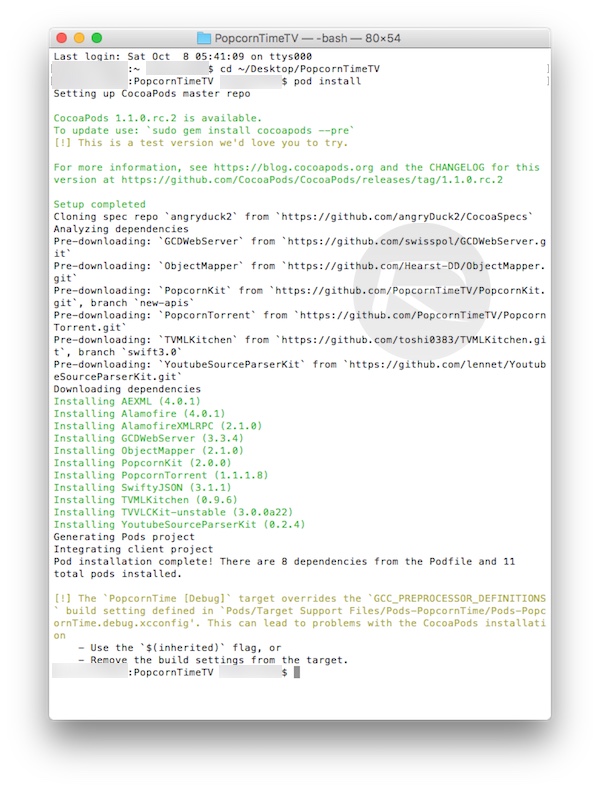 Step 4: Now open the PopcornTimeTV folder on your Desktop. Remember, this is where you cloned the repository. If you changed the location in the original download command, then you’ll need to navigate to that folder instead. Find the PopcornTime.xcworkspace file. Double-click to launch in Xcode.

Step 5: In Xcode, from the left sidebar under Targets, select PopcornTime and then click on the General tab. In Identity, you should now see a field that is titled Bundle Identifier. In the text field to the right of that title, change the text to “com.[YOURNAME].PopcornTime”. Make sure to replace the placeholder [YOURNAME] with, well, your name. In the screenshot shown below, we have entered “com.pct.PopcornTime” with pct being short for “Popcorn Time”.

Step 6: Now select TopShelf under Targets and then repeat the process from above with the Bundle Identifier for the TopShelf target, but with the addition of “.TopShelf” on the end, so it should be com.[YOURNAME].PopcornTime.TopShelf. Make sure [YOURNAME] is same for both Step 5 above and this step.

Step 7: Under General Tab in Identity, click on the dropdown box next to Team and sign in using your Developer Account’s Apple ID. Do this for both PopcornTime and TopShelf in Targets.

Step 8: Now connect your Apple TV to the Mac using USB Type-C cable. Hit CMD + R in Xcode to compile and run the project to the connected device. Alternatively simply hit, the Play button on the toolbar to begin the compilation.

That’s it! You can now get back to your Apple TV where Popcorn Time app will be sitting neatly on the tvOS home screen. 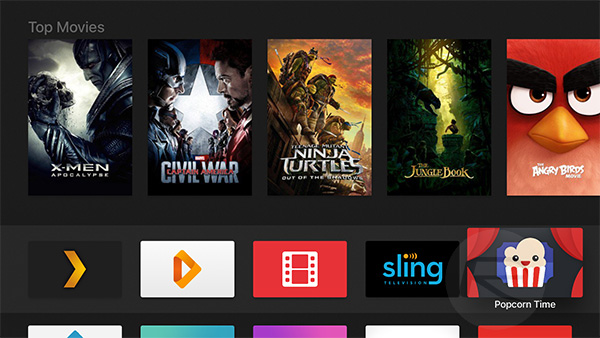 Alternatively, in case you can’t get the above to work, you can directly sideload the already-compiled .IPA file of Popcorn Time app to your Apple TV. To do this, simply download it from here, then sign it using your Apple ID, and sideload it using Xcode. Instructions for signing the IPA file and sideloading this way are similar to our previous guide on how to sideload Kodi on Apple TV. You can follow it all here: How To Sideload Kodi On iOS Without Jailbreak [Tutorial].

It’s important to note that compiling the code yourself is the recommended method of installing Popcorn Time on Apple TV because not only it’s the best and safest way of doing it, but it also gives you the latest version of Popcorn Time app for Apple TV.