How To Schedule WhatsApp Messages With Auto Reply On iPhone

One of the wonderful things about being able to jailbreak Apple’s iOS-powered devices is having the instant ability to install packages and extensions which not only change how iOS works at a system level, but can also be injected into existing third-party apps to change and extend the proposition.

That’s exactly what is happening with the recently released WAAutoReply package, which introduces scheduling and auto reply functionality to WhatsApp on jailbroken iOS 10 devices.

Rather than being a stand-alone tweak which looks to try and change how iOS works, or amends the look and feel of Apple’s mobile platform, WAAutoReply injects directly into the Facebook-owned WhatsApp experience to bring functionality that users have been crying out for.

In essence, the package is based around the ability to instantly send out automatic replies to incoming WhatsApp messages, which can be thought of in a similar fashion to how Apple allows messages to be sent when it is inconvenient to take an incoming telephone call.

WAAutoReply comes with a few pieces of key functionality when installed. First, is the Auto Reply feature, which allows the user to set their own pre-set message which will be used to reply to incoming messages. There is then a simple toggle switch within the WhatsApp settings to either enable or disable that Auto Reply feature. If enabled, any incoming messages sent through WhatsApp will automatically receive a reply back with whatever content has been specified by the device owner. This process takes place if the app is running in the background, and even allows you to reply from the Lock screen when the device is locked. 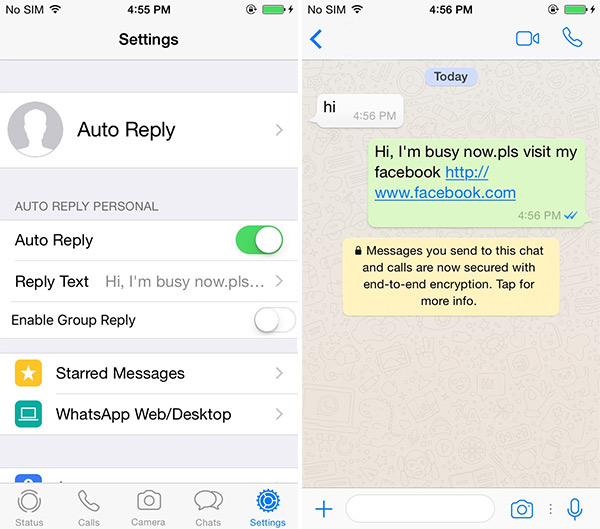 In fact, the functionality still actually works and kicks in if WhatsApp has been killed by the system to free up internal resources. There is also another simple toggle option to enable the auto reply functionality when a user is part of a group chat, although this could get pretty mundane and problematic for all other members of the group if the same reply is automatically posted every time one of those individuals sends a message.

With that in mind, it’s probably pertinent to keep that feature turned off for larger group conversations.

For those who are jailbroken, and who regularly use WhatsApp, WAAutoReply is available right now through the BigBoss repository in Cydia, but comes with a $5 price tag.