This post could easily just be an embedded YouTube video alongside just one word – "WOW" – and that would probably suffice. That said, we like to offer a little more insight than that here at Redmond Pie so here goes.

Samsung has launched yet another offensive aimed squarely at Apple and the iPhone. In the latest move of an ad campaign which has seen Samsung point fun at not just Apple’s iPhone but also the people who bought it, Samsung’s Galaxy Note is the (un)lucky recipient of the Korean firm’s ad dollars. The premise is your usual "our phone is better than theirs" affair which sees an iPhone user pitted against a Galaxy Note user on the mean streets of an un-named city with the aim of seeing which device is better at performing a selection of tasks.

It’s worth noting that before the madness begins, the video claims that the Samsung Galaxy Note user has only had the phone for a couple of hours. Yeah, right! 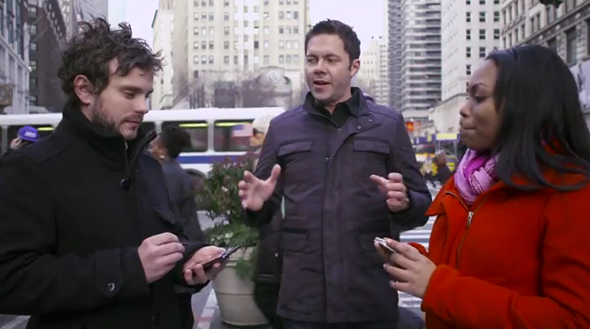 So, off we go. Both owners – should we be calling them actors by now? – are asked to perform tasks such as sending personalized messages, offering a map to a friend and editing a presentation. All three situations, unsurprisingly, result in the Galaxy Note coming out on top whilst the iPhone owner looks as moronic as is humanly possible and squeals a little bit.

Now, the ad doesn’t so much make us want to go and buy a Galaxy Note as it does hunt that iPhone owner down and beat her with a giant Galaxy Note, but that’s one digression we cannot afford right now.

While Samsung will no doubt feel the ad is comical, well targeted and offers that all important poke in the eye for its arch enemy, Apple, we beg to differ.

For starters, there is no way any Galaxy Note owner, after a couple of hours especially, will think to draw on a map and then take a screenshot of it for emailing. Hell, we’re not even sure we would think of it!

While we are no doubt going to get emails about our Apple bias – and yes folks, it does happen – let us remind you that even ardent Android fans don’t like the Galaxy Note. It’s a tablet lite. It’s a smartphone that thinks it’s a tablet. It’s schizophrenic in every sense of the word. And it’s got a stylus!

Our real problem here is the ad itself. While we like a little fun-poking in our ads as much as anyone else, the whole spot goes by with no mention of features, no benefits and no real look at the handset itself. It’s not designed to sell smartphones, it’s designed to poke fun at iPhone owners, and that’s just not cool.

Come on Samsung, you make some awesome phones. Let’s start advertising them for what they are instead of being so preoccupied with what the iPhone and its users can do?