Manufacturers like Samsung and Nokia had the freedom to push out whacky devices they liked into relatively innocent and emerging market. It’s also worth remembering that Apple didn’t even exist in the mobile space a few years back. Things have moved on a great deal in the last decade, but it seems certain markets are still hungry for the old-school designs of yesteryear. And now, Samsung is still keen to supply new and innovative clamshell style devices to those markets.

China Telecom currently enjoys a great working relationship with Samsung. The two companies have often partnered together to bring varying devices to the Chinese market and it isn’t any great secret that the telecom company is a big fan of luxury Samsung flip devices. If you like something and it works for you and your customers, then it makes perfect sense to continue the trend, which is exactly what has happened again as China Telecom and Samsung have introduce the new SCH-W2014 clamshell phone during a charity concert in Nanjing.

The annual Heart Of The World concert may not be dedicated to technology but the South Korean and Chinese partnership deemed it the perfect platform to introduce the latest in a luxury line of clamshell designs. The handset immediately claims the title as the world’s most powerful dual-screen flip phone due to its 2.3GHz Qualcomm Snapdragon 800 processor. The W2014 also comes with a generous 2GB on RAM as well as a whopping 13-megapixel rear camera and 2-megapixel forward-facing camera. 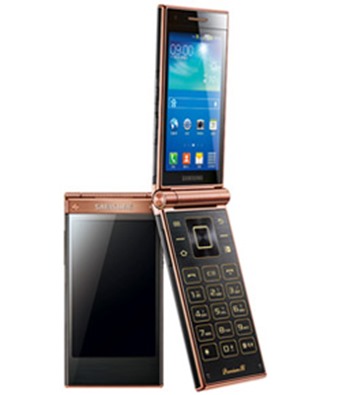 As with a lot of devices in the Chinese market, the W2014 will ship with dual-SIM card capabilities and will run Android 4.3 Jelly Bean out of the box. Not the latest version of Google’s mobile OS but it’s as close as you can get until KitKat becomes available for the device. Samsung’s other clamshell style designs may not be immediately recognizable in the American and European markets but they’ve managed to shave a little off the weight of the device compared to earlier models in the range. This type of design may not appeal to everyone, but at an estimated cost of $1,640 Samsung must be pretty confident there’s a market in China for it.

Also, keep in mind that this is not the first time Samsung has introduced a clamshell Android smartphone. And it was the Samsung Hennessy which still holds the crown in this category, after which Samsung deemed it necessary to release another clamshell droid, the Galaxy Golden.